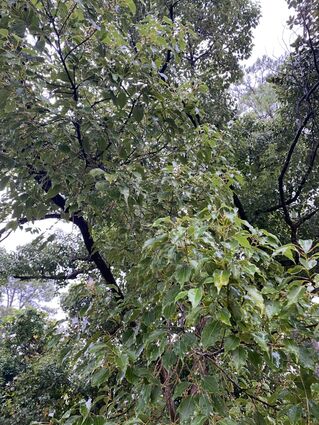 About 140 years ago, James B. Seargent of Orange had a vision for a new industry involving trees. He wasn't looking at the native trees that drew the sawmill and lumber industries. He was ready to grow imported trees for medicinal uses.

Little did he know his carefully nurtured seedling would grow to become an invasive species. Maybe we can blame him for all those little camphor trees that sprout up in garden beds and yards every year. But then again, someone else may have eventually decided to plant them.

The camphor tree is native to Japan, China, and Vietnam, according to the Texas A&M AgriLife website. It has been used for centuries to produce camphor oil, which has medicinal uses and is even used today in products like Vicks VapoRub and Campho-Phenique.

Seargent had the idea that Orange's soil and temperate climate would might be good for growing camphor trees on a large scale basis.

On May 27, 1909, The Daily Leader, a local newspaper, reported on Seargent's longterm project under a big headline reading "Camphor Industry May Become Great Wealth Producer In Orange County."

The story told how Seargent became interested in camphor trees in the 1880s and got three seedlings from "Washington," though the story did not specify whether the trees came from the nation's capital or from the west coast state.

Seargent shared one seedling with Mrs. Frances Ann Lutcher, wife of the co-owner of the largest sawmill in town. He gave another one to Captain J.S. Anderson. Unfortunately, the trees belonging to Mrs. Lutcher and Captain Anderson died. Camphor trees are subject to have limbs die during freezes, though established trees can be trimmed and limbs will grow back.

Seargent was successful with his tree and within three or four years, it began to produce fruit, The Daily Leader reported.

The fruit of a camphor tree is a berry that turns a deep purple that appears to be black. As locals have learned in the decades since camphor trees spread, birds love to eat the camphor berries in the fall. Many car owners through the years know the berries quickly pass through the birds as purple poop droppings have stained some vehicles.

But Seargent wasn't thinking of the excrement, he was after the oil. He gave away his camphor berries to others and planted more. After some 20 years of growing and spreading camphor trees, Seargent was ready for his big economic development project, to make Orange a camphor-producing county.

"Mr. Ernest Cooper grew a large tree at his place in front of the Christian church, but cut it down when the tree was about 18 inches in diameter. There are several trees in the front yard of Mrs. S.M. Brown's place on Green Avenue, near the S.P. depot," The Daily Leader story read.

Seargent also had several camphor trees in his yard and "a number on his place out of town."

The Houston Chronicle heard about the project and contacted Seargent, who by 1909 was postmaster in Orange, a prominent position in town.

The Chronicle reported Seargent was planning a method to go through acres of the trees and cut the leaves and limbs off at a certain level. Even with the top cut off, a camphor tree can quickly grow new limbs and leaves for a future harvest.

Camphor oil is made by distilling the wood and bark of the camphor trees. The trees are in the cinnamon family and the Latin name for camphor is Cinnamum Camphora.

Though the newspaper stories did not mention whether Seargent's plan included building a local distillery factory, perhaps the postmaster was dreaming of a getting investments. And maybe residents of Orange were dreaming that the smell of a camphor distillery might mask the smell of the Yellow Pine Paper Mill, later Equitable Bag Company, along Adams Bayou.

Camphor trees never became big business in Orange County, but the trees were popular, particularly in the old neighborhoods. The Old Orange Historic District still has century-old houses with camphor trees in the yards. With birds squirrels spreading the seeds, the trees spread. These days, most yard owners and those with garden beds spend time each year pulling the waxy-leafed seedlings out of the ground.

One of the biggest displays of old camphor trees was lost to highway improvements. The brother of the founder of the Kishi Japanese farming community planted camphor trees along FM 105 west of FM 1442 in the early 1900s. The trees grew for a hundred years, making the roadway a shaded tunnel until a state highway department road widening project cut the trees down.

The Kishi colony was started in 1907 by Kichimatsu Kishi. A Texas State Historicl Marker is on FM 1135 near the Terry Community to mark the colony. In a 1982 interview with the Beaumont Enterprise, Taro Kishi (1903-1993), the son of the colony's founder, talked about how his uncle had planted the camphor trees along the highway. He didn't say whether the Kishi settlers brought the seeds with them or if they got them in Orange County.

No matter where the seeds came from, those invasive camphor trees have a history in Orange County.