West Orange's Holiday in the Park set for Saturday 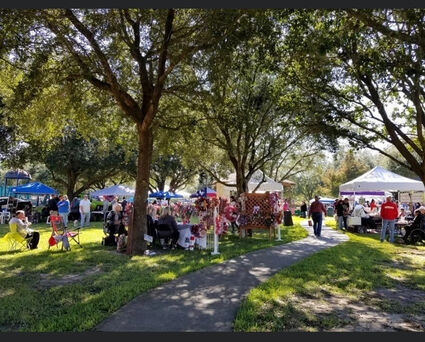 Back in 1998, West Orange Mayor Roy McDonald was enjoying the old Gumbo Cookoff in neighboring Orange. He had a vision that his city, too, could have a community event for people to relax and visit with each other.

West Orange resident Theresa Van Meter at the time was working for the Greater Orange Area Chamber of Commerce, which sponsored the event. McDonald asked her if she could help organize an event for West Orange.

The result is now a part of local history. On Saturday, West Orange will have its 21st annual Holiday in the Park at Seals-Alford Plaza next to city hall on Western Avenue. The hours are 9 a.m. to 5 p.m., though some vendors start packing up earlier.

Van Meter has since become West Orange city secretary and has worked on the festival since its beginning in 1998. She said they canceled in 2008 after Hurricane Ike flooded much of the city, another cancellation came because of weather, and then in 2020, the Covid pandemic ruined many events.

On Tuesday, Van Meter was concerned about the rain. The week started out with no rain forecast on Saturday, but by Tuesday morning, the forecast was calling for a 50 percent chance. Van Meter is hoping the rain goes away before Saturday, or waits until Sunday.

Holiday in the Park has become a way for people to mix and mingle, buy Christmas decorations and gifts, each homemade foods, listen to music, and most importantly, visit with old and new friends. McDonald has since retired as mayor, but he usually comes to stroll the booths and talk with people.

Last year, West Orange City Councilor Meritta Kennedy organized a car show to go with Holiday in the Park. Restored vintage cars and trucks are on display around the park for viewing. Some will be awarded plaques for best in show. Cheryl Green, who works for the city, organizes the vendors and the entertainment.

"It's really a team effort" for the city, Van Meter said. That team effort includes the building inspector and the public works department.

Entry is free for the car show and people who come to stroll around. Van Meter said no alcohol is allowed on the grounds. The city is allowed to have the only booth selling carbonated sodas, though other vendors may sell tea, coffee, or lemonade.

She said the income from the soda sales helps pay for the event, along with the money charged for vendor booths. "The festival has never been a money-making thing," she said.

Some of the vendors return every year and their customers look forward to buying gifts and food. Festival-goers will be able to purchase decorated gift baskets with a variety of items inside, handmade jewelry, birdhouses, wind chimes, yard art, holiday wreaths, Christmas decorations, toys, soaps, and more crafts.

Food is an important part of Holiday in the Park. Picnic tables set up under the shade of live oak trees give people a place to eat and a wide variety of foods are available to eat on site or take home.

This year there will be booths selling seafood gumbo, chicken and shrimp salad sandwiches, shrimp pistolettes, red beans and rice, chili, and lots of homemade desserts like 7-Up cake, cookies, brownies, cakes, and mini-pies. Homemade jams and jellies, including mayhaw, will be sold along with pickles.

Local singer Shon Branham as served as master of ceremonies from the park's gazebo since the festival started. He will kick off the event at 9 a.m. At 10:30 a.m., the West Orange-Stark Elementary School choir under the direction of Bernita Bias will perform songs including "Hallelujah," "Rudolph the Red Nose Reindeer," Winter Wonderland," and "Emmanuel." 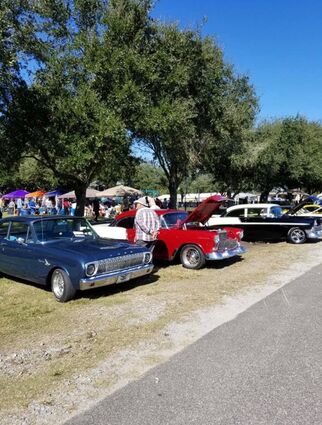 The Gulf Coast Playboys will play Cajun and country music from 11 a.m. to 1 p.m. Musicians are Alex Caswell on vocals and accordion, Joe LeJeune on lead guitar, Tommy Wolfford on drums, Luke Juda on bass, and Donnie Marze on guitar.

The car show winners will be announced from the gazebo from 1 to 1:30 p.m. and plaques will be awarded. Then from 1:30 to 2:30 p.m., the singing duo of Bubba and Sharon Meaux will perform country songs.

Shon Branham will conclude the entertainment from 4:30 to 5 p.m.