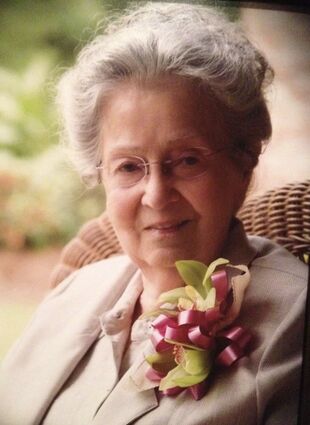 Marjorie Nell Rogers, 99, of Orange, passed away on October 27, 2022, surrounded by family at her home, twenty-seven days shy of her 100th Birthday.

Funeral services will be 1:00 p.m., Tuesday, November 1, at Bridge City United Pentecostal Church. Officiating will be Reverend Murry Ray. Burial will follow at Oak Bluff Memorial Park in Port Neches. Visitation will be held prior to the service from 11:00 a.m. to 1:00 p.m., Tuesday, at Bridge City United Pentecostal Church. Born in Kinder, Louisiana, on November 23, 1922, she was the daughter of George William Wilcox and Lessie Gay (Foster) Wilcox. At the age of sixteen in 1938, Marjorie married Ivan Rogers and moved to Port Arthur, Texas. Marjorie was a former longtime member of the First Pentecostal Church of Port Arthur where she taught Sunday School to teenage girls for many years. Many lives were forever changed by her ministry as a Sunday School teacher. She was very devoted to the Lord and in later years she and her husband, Ivan, became members of the Bridge City United Pentecostal Church. Marjorie was an artist who painted numerous pictures as a hobby, one notable one of Wayne’s pet Racoon, Coonie, that was quite mischievous as he woke the neighbor from a nap grabbing her feet, resulting in her losing her voice from the scream. She played the piano and loved music. Marjorie (known as Mommie to family) was a wonderful cook for her family members as well as many pastors and ministers. A great-grandson affectionately called her Mommie-Cooks. Several years ago, a family treasure was created, a cookbook of her recipes written in her handwriting. Memories of her recipe dishes prepared around her holiday table and other occasions will live on forever in the lives of family. She was the most caring and loving person who mothered and nurtured not only her children, grands and great-grands, but numerous young people. Many have said she was the greatest Christian they have ever known. To know Marjorie was to love her. She was devoted to her family and never missed a moment to spend time with them. Marjorie was known to love and find good in everyone. She left a positive impact on many lives in her 99 years here on earth with us. Marjorie will be deeply missed by those who knew and loved her. She is preceded in death by her loving husband, Ivan Rogers; parents, George and Lessie Wilcox; son in law, Max Morris; and grandson, Marlin Morris. She was the next to youngest of nine children and the last surviving member.