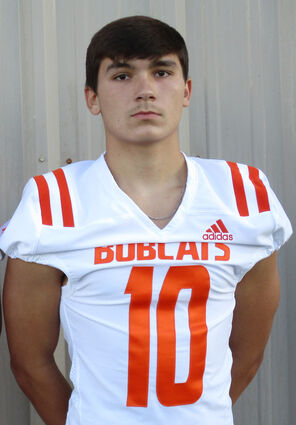 The Orangefield Bobcats remain undefeated in district with one game to play in the regular season. A Bobcat win on Friday will clinch the district championship for them.

Last Thursday Orangefield played at home and clobbered the Kirbyville Wildcats 58-0 for the Bobcats fifth straight win. The Orangefield defense held the Wildcats to just over one hundred total yards while the Bobcats rolled up 451 yards of offense all on the ground thanks to a great job by the offensive line.

Coach Josh Smalley was obviously pleased with the win by the Bobcats. "It was a good win for us. Defensively we got a shutout, that's always nice to do. I think everybody contributed," Smalley summarized.

Cameron Dischler ran for 217 yards and four touchdowns. Gavin Perry-Koci scored a touchdown and had 127 yards rushing. Case Singleton only carried the ball twice but scored touchdowns both times.

Bobcat quarterback Brayden Parker did not throw a pass in the game and only ran the ball himself twice but deftly guided the Orangefield offense. Smalley assessed, "I don't think Brayden Parker gets enough credit for running the offense the way that he does. A lot of people think he just turns and hands the ball off. I don't think they understand the mental part that goes into it about making sure we're in good plays, getting us out of bad plays. He's a coach on the field, he gets people lined up when they're not lined up correctly, and things like that. Brayden has really played well for us at the quarterback position."

In the first half of the game Rusten Traxler at noseguard reinjured his ankle which had kept him out of the lineup early in the season. Traxler is questionable for this week's game but hopefully could be ready for the first round of the playoffs in two weeks for Orangefield.

One of the district favorites coming into this season was the East Chambers Buccaneers. The Bobcats travel to Winnie on Friday to play the Buccaneers who are 4-1 in district just one game behind Orangefield.

The Buccaneers line up on offense in the Shotgun but not in a true Spread formation. Instead of four or five wide outs East Chambers uses a tight end or H Back in its offensive scheme.

The offense for the Buccaneers starts with their quarterback Jacoby Perrault. He is a four-year starter for East Chambers and totaled 1700 yards passing and rushing last season accounting for 25 touchdowns. "He's a heck of a player. He's one of the top three or four players in our district. Perrault can throw it, and he can run it. He can do a little bit of everything," Smalley acknowledged.

East Chambers has some other backs that can run the ball too. Ja'den Thibodeaux, Hadyn Reeves, and Chris West split the carries in the backfield for the Buccaneers. Reeves is a junior and rushed for 1,257 yards with 15 touchdowns as a sophomore. All are a threat to break a long one at any time.

Leading the offensive line for the Buccaneers is junior Will Kash who stands out, and they like to run behind him. EJ Guillory is another stalwart blocker for East Chambers.

Orangefield will be faced with trying to stop the run and the pass against the Buccaneers. Smalley analyzed, "Huge challenge coming for us Friday night. They do a little bit of everything."

On defense East Chambers bases out of a four-man front. Against Tarkington two weeks ago the Buccaneers used an odd five-man front which is similar to what they did a couple seasons back in 2018 and 2019 against Orangefield when they and the Bobcats were in the same district. Orangefield will have to prepare for both even and odd man fronts this week according to Smalley.

EJ Guillory is really a defensive specialist in the front line for the Buccaneers. Guillory is big and tough to move.

Inside linebackers Matthew Reddell and Spencer Schepf anchor the middle of the defense for East Chambers. They come downhill to make tackles.

The outside is adequately covered by defensive end Garrett Reeves. The Buccaneer secondary is led by Perrault at safety where he had 5 interceptions last season. Darius Green and Payton Anderson are wide receivers on offense who switch to being defensive backs and are both very good.

Friday is the final game of the regular season. Both Orangefield and East Chambers have earned berths in the post season but seeding for the playoffs will be at stake in the game.

The game should decide the district championship. Smalley explained, "With a win we earn the number one seed and the outright district championship. A loss we would still be technically co-champs or tri-champs with East Chambers and Anahuac with point spread that could have us go from the one seed to the three seed depending on the scores. We don't want the word "co" in front of this, we would love to be the only district champion, but we understand we're up against a really good football team."

Two games have been played so far between Orangefield, Anahuac, and East Chambers. The Bobcats beat the Panthers by 10 points, and the Panthers defeated the Buccaneers by 25 points.

The keys for a Bobcat victory are no different than they are every week Smalley reminded. "We can't turn the ball over and can't have penalties on offense. We've always got to be moving forward. Defensively against the Buccaneers we can't give up big plays. Perrault has the ability to throw it about 65 yards in the air so their receivers are never really out of range. When you think you've got guys covered he'll take off running so he's a legit dual threat. My concern is we've been rolling pretty good the past month or so and have not needed to play a full 48 minutes. We're going to have to go Friday night into an environment that is tough to play against a really good football team and we're going to have to play 48 minutes to win it," Smalley concluded.

The Orangefield Bobcats and the East Chambers Buccaneers play Friday night. The kickoff is at 7:30 PM in Winnie.