Cardinals close out season against Liberty 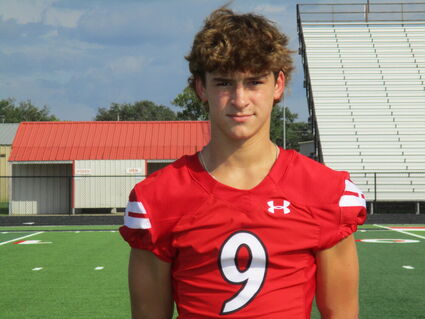 The Bridge City Cardinals play their final game of the football season on Friday. The Cardinals would love to finish their year on a winning note.

It has been a difficult year for the football team in Bridge City. After a win in Week 2 of the season the Cardinals have lost seven straight games including a shutout last week to the state ranked Silsbee Tigers.

Bridge City coach Cody McGuire was proud of his Cardinals who played hard against an excellent Silsbee team. "They're very talented this year and deep. They do a great job over there and I respect their coaching staff. Our kids did fight, but they just did not play well and the game got out of hand," McGuire admitted.

One aspect of the game that was a bright spot for the Cardinals according to McGuire was the special team on kickoff returns. Bridge City returned the kicks past the 40-yard line every time. Austin Bellanger did a good job returning the kicks.

The hope this week is to turn things around in this final game. McGuire offered, "We're just looking forward to getting back out there on Friday and trying to right the wrongs and make things better before the off season to build things for next year."

The opponent on Friday will be the Liberty Panthers. This season has been a struggle for the Panthers just like it has been for the Cardinals. Both teams have just one win on the year. Liberty defeated Hardin-Jefferson in Week 7 for its lone win in district and for the season.

The Panthers are under the leadership of a new head coach Chris Lackey and have gone from the Wing T to a balanced Spread Offense running and throwing the ball about equally. Despite the poor record Liberty has shown some ability to put points on the board averaging over 17 points a game including 42 in the win over Hardin-Jefferson.

Leaders for the Liberty offense are wide receivers Zach Breaux and Dawson Victorian. Breaux is the Panthers' big play receiver especially if he is covered man-to-man. Victorian will also shift into the Wildcat and take direct snaps from center. Nate Wilkinson is a third pass catcher for them, and Dra'core Bankhead is their possession receiver.

Quarterback Gavin Fontenot can throw the ball well and will be used as a runner also. The primary running back for Liberty is Alex Valtierra.

The record could be deceiving for the Panthers because they have played four opponents including Jasper close losing by a single touchdown. "They present a great challenge for us. We're looking forward to it though. The Panthers like to run the speed option quite a bit, the buck sweep, then they like to throw, and they like to get the ball to their big playmakers Victorian and Breaux. They do a good job," McGuire stated.

The Panthers line up in a 3-4 on defense. The front line will shift after the initial alignment into a 4-2-5 look.

The key Panther up front is Victor Ruiz at a tackle. Kade Johnson is an impressive looking junior at defensive end.

The true leaders on defense for Liberty are linebacker Colby Ewing and free safety Zach Breaux. Ewing runs well to the ball and can pop opposing ball carriers. Breaux leads a strong group of Panthers in the secondary who can all cover man-to-man.

Liberty has several talented individuals on defense. McGuire evaluated, "Collectively they're a pretty good defense led by Breaux who makes them go on defense."

The final game of the season will not be the last varsity game for many of this year's Bridge City Cardinals. "We've got quite a few sophomores that we've had on the varsity all year, and they've played a lot. Especially with the injuries we've had this year our sophomores have gotten great experience so it's just going to help us in the future. We want to take some momentum into the off season, get on a roll, and get ready for next season. We're looking forward to finishing out the year and sending our seniors out as winners," McGuire concluded.

The final game of the year for the Bridge City Cardinals and the Liberty Panthers will be Friday night. The kickoff will be at 7:30 in Bridge City's Larry Ward Stadium.