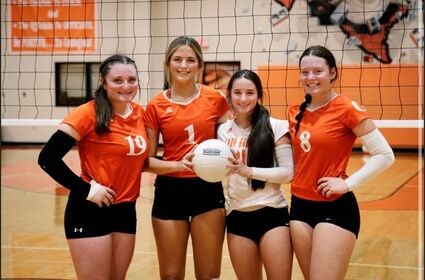 Orangefield needed five sets on Tuesday, October 25, to edge past the Anahuac Lady Panthers. The Lady Bobcats captured second place in their district with the exciting win.

Anahuac won the first set 25-23 overcoming a 14-7 deficit to the Lady Bobcats in the process. Orangefield took the next two sets 25-16 and 25-20 leading most of the way in both sets. The Lady Panthers forced a deciding set winning 25-21 in the fourth set.

The final set was very dramatic as once again Orangefield took an early lead 10-3 only to have Anahuac rally and go ahead 13-12. The Lady Bobcats won a point on a Lady Panther serve to tie the score.

Brianna Moore then served for the Lady Bobcats, and they took the lead. On the next point Harleigh Rawls hit a volley that the Lady Panthers could not return to give Orangefield the win 15-13.

Mackenzie Haley led the Lady Bobcats with 17 kills, and she had 19 digs to go with 2 blocks and 2 aces. Libby Thurman was the top server for Orangefield with 5 aces. She also had 23 digs.

Rawls had a team high 27 digs for the Lady Bobcats plus 19 assists. Brianna Moore with 29 assists was the leader in that statistic and added 16 digs.

Orangefield's Lela Francis served 2 aces and had 9 kills. Greenlea Oldham contributed 8 kills and she along with Kaitlyn Jenkins both had 1 block.

The Orangefield Lady Bobcats played their bi-district playoff match on Tuesday, November 1, against Huntington in Warren.