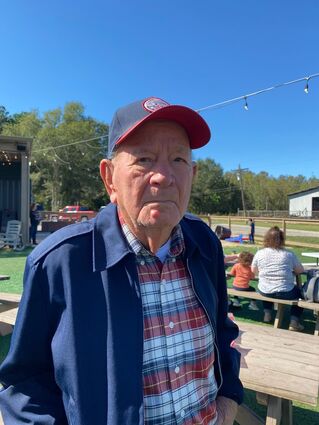 Cedric Stout of Bridge City, the area's last living survivor of the Pearl Harbor attack, enjoyed sunshine and Cajun music on Saturday to celebrate his 101st birthday. He has eight surviving children and posed with two of them.

Saturday morning began with thunderstorms and pouring rain. But by noon, the sky had cleared to bright blue and a front had brought cool temperatures. God wasn't going to let it rain on Cedric Stout's party.

Stout is Orange County's most famous veteran and he celebrated his 101st birthday. Not only is Stout a World War II veteran, he is the last area survivor of the attack on Pearl Harbor.

He said he owes his longevity to having nine children to help him, with eight of them surviving to this day. They live nearby and have helped him through the years, including after devastating hurricanes in the 21st Century.

Stout is a native of Louisiana where he grew up in the Bayou Teche region. As a teenager in the Great Depression, he had joined the Civilian Conservation Corps working on public projects. When his term in the CCC ended, he joined the Navy.

He had turned 20 years old days before the Japanese made a surprise attack on the Pearl Harbor base on Sunday, December 7, 1941.

He was aboard the USS Utah and in a berth that Sunday morning. "I wasn't expecting it," Stout said about the attack. He stuck his head out a porthole to see what was going on, and bullets flew by his face. Then the first torpedo hit. Then another. The Utah began sinking.

In less than 12 minutes after being hit, the Utah toppled over. Dozens of men were trapped, but most, like Stout, managed to get out. He found a berthing rope to help guide him to swim to shore. 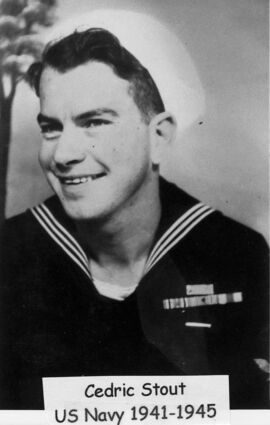 The raid on Pearl Harbor launched the United States into World War II with President Franklin D. Roosevelt famously calling the attack "a day that will live in infamy." Stout's job as a sailor in wartime had begun.

He traveled around the world during the war and earned his "shellback" designation when he crossed the equator.

After the war, he married and the family moved to Bridge City in 1958, where they stayed. Stout was married to his wife, Delmar, for more than 50 years before she passed away. When he was 80, he married a younger woman, Cherry, who was 60 at the time. She is now recovering from hip surgery and was able to attend his birthday party at Bullfish restaurant between Bridge City and Orangefield.

Stout had a good time in the good weather at his birthday celebration and hopes to have party 102 next year.