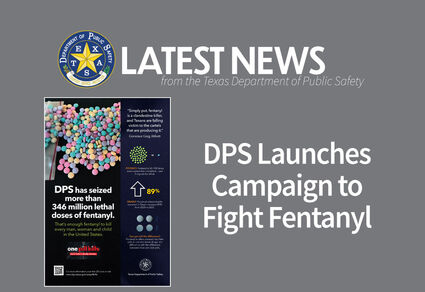 “Fentanyl is now the deadliest drug threat facing Texas and the nation, with thousands of innocent Texans and Americans losing their lives to this clandestine killer,” said Governor Greg Abbott. “With help from state agencies, Texas is increasing efforts to stop Mexican drug cartels from smuggling this deadly drug into our communities, as well as raising awareness of the danger this drug poses, even with just one pill. I thank DPS for their tireless work supporting the recently launched ‘One Pill Kills’ campaign to keep Texans safe from this deadly scourge. The State of Texas is deploying all resources to address the growing national fentanyl crisis and help prevent more innocent lives from being lost.”

Fentanyl makes its way into our communities as a consequence of an unsecure southern border. In March 2021, at the direction of Governor Abbott, DPS launched Operation Lone Star (OLS) to help combat that influx of drugs. Since OLS began, DPS alone has seized more than 350 million potentially lethal doses of fentanyl statewide.

“The Mexican cartels have taken fentanyl and massed produced counterfeit pills to look like oxycontin, oxycodone, Percocet and other pills and people don’t know what they’re taking,” said DPS Director Steven McCraw. “They think they are taking Adderall or something else and what they are really getting is a lethal dose of fentanyl.”

The goal of the department’s new public awareness campaign is to boost Governor Abbott’s recently announced “One Pill Kills” campaign in a collaborative effort to reach as many people as possible. Signage detailing the dangers of synthetic opioids are being posted in more than 350 public facing DPS buildings across the state, including driver license (DL) offices and other state buildings.

Additionally, public services announcements (PSAs) will begin playing in the waiting areas of 181 DL offices statewide later this month. These 30 second PSAs will educate viewers and provide useful resources in the fight against fentanyl.

DPS also published a webpage dedicated to educating Texans about fentanyl and its dangers. This will serve as a resource where people can learn more about the deadly drug, how to talk to kids about the dangers, and other helpful information to provide Texans with the knowledge they need to protect themselves. Visit http://www.dps.texas.gov/onepillkills to learn more.