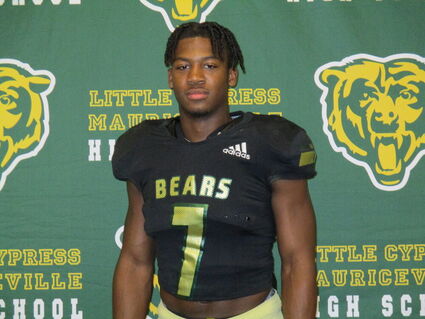 The win by LCM (6-4, 3-2) not only secured a berth in the post season it moved the Bears into the third seed for District 10-4A Division I. Huffman (3-7, 1-4) finished the season in fifth place and out of the playoffs.

Field position was heavily in favor of the Bears who started six of their drives in Falcon territory and two other times began at LCM's 46 and 44 yard lines. Little Cypress-Mauriceville scored on six of those eight possessions.

The Bears' defense got things going for the offense when Jackson Smith intercepted a Falcon pass on the third play of the game to give LCM the ball at the Huffman 15. Da'Marion Morris carried four times and got the touchdown from the one with less than three minutes played in the game to put the Bears up 7-0.

A second interception this one by Luke McDow and personal foul on the Falcons during the run back gave the Bears the ball at the Falcon 34. Morris wasted no time scoring on the next play, and it was 14-0 with 4:44 remaining in the first quarter.

Facing a fourth-and-three at their 41 the Falcons went for it but the Bears' defense again came up big stopping a lateral pass to Dylan McMullen for a yard loss giving LCM the ball only forty yards from pay dirt. Once again Morris got the call carrying the ball on five of the six plays and scoring his third touchdown of the quarter from the one with 1:08 left on the first quarter clock.

Morris then returned a Falcon punt 48 yards to the Huffman 28. The Bears failed to score when the Falcon's Jake Moorhaj intercepted a Dean Reynolds' pass in the end zone and returned it to the 27 of Huffman.

The Bears defense held forcing a punt which allowed LCM to start at its own 46. This drive showed a little variety as Kyler Garlaska ran for a first down, Morris got a first down running out of the Wildcat, Reynolds picked up a first down on a run, and then he threw for a first to Elijah Allison at the Huffman 13.

The scoring drive ended as had the previous three with Morris scoring this time from 13 yards out. Lucas Wright kicked his fourth extra point of the half to make the score 28-0 with 5:12 left in the second quarter.

Huffman mounted its only sustained drive of the first half with quarterback Tyson Woodland throwing the ball primarily to slot receiver Tyler Wilkins. Three straight completions by Woodland moved the Falcons 64 yards the last 52 on a very nice catch and run by Wilkins for the touchdown. The same combination connected on the two-point conversion to narrow the score to 28-8 with 33 seconds before halftime.

The Falcons kicked off to start the second half and kicker Jonathan Klepetko bounced his kick to the left which was fumbled by the Bears and Klepetko recovered for Huffman.

Rain started to fall making conditions very slippery even on the new synthetic turf at Battlin' Bear Stadium. The defense for LCM held forcing a Falcon punt which the Bears allowed to roll dead at their seven. The first snap eluded Reynolds and went into the end zone where when Reynolds and Morris could not scoop up the wet ball elected to knock it out of the end zone to give Huffman a safety at 10:55 of the third quarter.

Huffman now had the momentum and appeared ready to climb closer after a good return by Kurtis Felder on the free kick to the Bears' 26. A penalty moved the Falcons back to the 31 and they could get no closer than the 30 turning the ball over on downs to LCM.

The next Falcon possession started at their 41. After Dylan McMullen ran for a first down Woodland and Wilkins teamed up again for an 8-yard completion before a 41-yard bomb and a touchdown to make the score 28-16 with 4:13 left in the third quarter.

Enough was enough as DeMarco Bandiero recovered an onside kick for the Bears at their 44 yard line. It was back to the formula that worked so well in the first quarter; give the ball to Morris until he finds the end zone. Six totes by Morris, the last for 27 yards, resulted in six more points for the Bears. A poor snap kept the score 34-16 with 1:58 remaining in the third period.

Getting a bit desperate Huffman went for it on fourth-and-seven at its 36 but linebacker McDow smashed Wilkins as the ball arrived on a pass from Woodland causing an incompletion and giving the Bears possession at the Falcon 36-yard line. Morris scored his sixth touchdown of the game on a 17-yard run to increase the lead to 41-16 with 10:24 to be played in the game.

Following an interception by the Bears' Daunte Greer the LCM second team offense went to work. Quarterback William Payne and halfback Jonah Fuller alternated carries to move the ball 80 yards. Payne scored on a 22-yard run to make the final 48-16 in favor of the Bears.

It was another marvelous evening for Morris who totaled 228 yards on 28 carries to go with his half dozen touchdowns. Payne played just one series on offense for the Bears gaining 57 yards on 4 carries with his touchdown. Reynolds was 7 of 13 passing for 57 yards.

The bulk of the Huffman offense came from the passing of Woodland who completed 17 of 33 tosses for 219 yards. Wilkins had 5 catches for 116 yards and scored all 16 Falcon points.

With their third place finish the Little Cypress-Mauriceville Bears will face the Kilgore Bulldogs (7-3, 5-1) who finished second in District 9-4A Division I. Details of when and where the Bi-District playoff game will be held should be forth coming on Monday or Tuesday.