Bears to collide with Kilgore on Friday 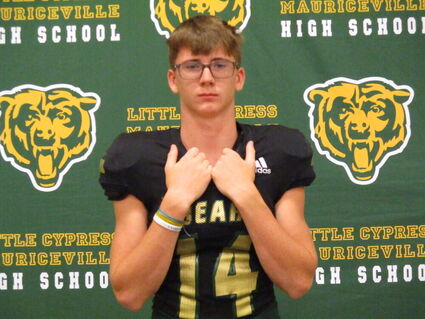 The Little Cypress-Mauriceville Bears achieved a much needed win last week to secure a berth in the post season. This week the Bears open the playoffs and hope to have an extended run like they did last season.

LCM took an early lead against the Huffman Falcons last Friday, and withstood a brief rally by the Falcons to claim a 48-16 victory. The win earned the Bears a third seed in their district for the playoffs.

Coach Eric Peevey saw the game as a triumph for the whole Bears team. "It was a great team win. We didn't have very many penalties, we held on to the ball very well, we had a lot of possession time with the football, ran the ball well, blocked well, when we needed to throw it a little bit we were able to, but we just kind of moved into the style of football we need to play to win right now at this stage of the year in the playoffs when we'll be playing really good teams," Peevey evaluated.

The Bears won the turnover battle suffering one interception and a fumble on an onside kick while Jackson Smith, Luke McDow, and Daunte Greer all made key interceptions for LCM. The defense also made a couple of big stops on fourth downs to turn the ball back over to the Bears' offense.

On the offensive side of the ball Da'Marion Morris ran for over 200 yards and scored a school record at Little Cypress-Mauriceville six touchdowns. Peevey praised, "He deserves every record he breaks."

Two Bears were called up to the varsity and played well against Huffman. Carson McIlwain replaced the injured Jordan Pollack at tight end, and Jovany Molina did a good job in the offensive line.

The third seeded Bears will open the playoffs against the second seeded Kilgore Bulldogs from District 9-4A Division I. The Bulldogs are 7-3 on the season and were undefeated in district until losing 32-20 to the district champion Chapel Hill Bulldogs last week.

Kilgore uses multiple offenses lining up in several different fronts. The Bulldogs may use a Spread formation or their quarterback will get under center. They can throw the ball and they can run it. Either way the emphasis for Kilgore is ball control.

The "bell cow" for the Bulldogs is senior running back Isaiah Ross. After rushing for 800 yards and 8 touchdowns as a junior Ross has topped both of those numbers with over 1500 yards and 15 touchdowns averaging about 10 yards a carry this year. Ross with his many long touchdown runs reminds Coach Peevey of his own star back Da'Marion Morris.

Ross is not the only weapon Kilgore can use. Senior quarterback Da'Marion Van Zandt stands tall in the pocket at 6-2 and about 220 pounds. Van Zandt can run with the ball or he can throw with a cannon of an arm like he did last year when he passed for 2200 yards and 22 touchdowns.

The Bulldogs use a variety of receivers in their passing game. Jayden Sanders, Matthew Tyeskie, Zaylon Stoker, and PJ Wiley will all be targets for aerials from Van Zandt.

The offensive line is big for Kilgore. Braydon Nelson is a leader in the line for the Bulldogs.

The offense is in no hurry when the Bulldogs have the football. "They're going to huddle up, they're just going to run their ball control offense, and just nickel and dime you down the field taking the big plays when they're offered. Offensively you can tell that they're a defensive minded type team. They're not going to make a lot of mistakes on offense it's mostly just play with good field position, run the ball, and play well," Peevey summarized.

The Bulldogs hang their hat on their very talented defense. Kilgore's 3-4 alignment and its tenacity brings to mind the West Orange-Stark defense Peevey mentioned.

Kilgore will not gamble or take a lot of chances on offense because the Bulldogs know their defense can stop opposing offenses to get the ball back and set the Kilgore offense up in good field position. The Bulldogs were statistically the top defensive unit in their district yielding about 250 yards a game.

The defensive line is where everything starts for Kilgore. Senior noseguard Peyton Christian is the anchor in the Bulldog defense. Christian is 6-5 and 270 pounds and is a run stopping bulwark in the middle. Last season Christian made 94 tackles with eight of those being behind the line of scrimmage.

Joining Christian in the front three is Jacob Caruthers for the Bulldogs. A key pass rusher is Demontrell Candie on the outside at either an end or outside linebacker position to put pressure on opposing backfields. Peevey indicated, "They really don't blitz a lot, they usually only bring about four, but those four guys kind of get after it."

The defensive secondary has two solid returners. Stoker and Tyeskie both had two interceptions and made over fifty tackles apiece last season for Kilgore.

The Bears and the Bulldogs are fairly evenly matched going into Friday's Bi-District playoff game. LCM is 6-4 with three of its losses to playoff teams and the other one to a very good private school. Kilgore's three losses are to a trio of quality opponents in undefeated Carthage and Gilmer and finally to district champion Chapel Hill.

The key to victory for Little Cypress-Mauriceville is not making mistakes. Peevey shared, "Any turnovers, penalties, or things like that we've got to nip all that in the bud. We've got to get after it and play our style of football which is ball control and get Da'Marion involved, but we're also going to have to throw the ball to win this game so we're going to have to get some plays downfield."

Coach Peevey is hoping for a repeat of last year's run by the Bears in the post season. "We know the challenge that we have ahead of us. That other district is a very tough district. Last year we were the only team from our district to win a game that district had three teams advance out of Bi-District. It's a long playoff run, but this game in the first week of the playoffs is as good as a game in week five or six of the playoffs," Peevey concluded.

The Little Cypress-Mauriceville Bears face the Kilgore Bulldogs on Friday. The kickoff is scheduled for 7:00 PM at Abe Martin Stadium in Lufkin.