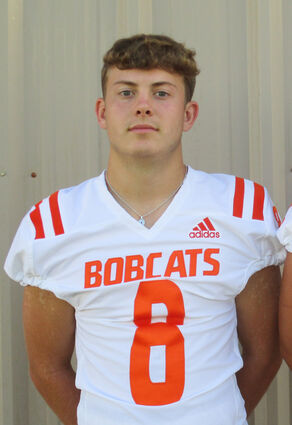 Jackson Humplik of the Bobcats caused a fumble, scooped up the loose ball, and returned it for a touchdown in Orangefield's big win over East Chambers

The Orangefield Bobcats needed a win last week to win the district championship and earn a better seed in the state playoffs. The Bobcats are the number one seed in their district and start the post season this week.

The threat of severe weather caused Orangefield's game with East Chambers to be moved to Thursday last week. The Bobcats rallied to take the lead against the Buccaneers and then held on 28-21 to win the game that kept them undefeated in district action and enabled them to claim their first outright district title since 1988.

Coach Josh Smalley praised the effort by his Bobcats. "It was a big win for us obviously. The game was what I thought it was going to be a 12-round title fight against a great coached team and a really good athletic team. We had to compete, we had to fight, we had to overcome a lot of things, and so I'm proud of the kids," Smalley acknowledged.

Several Bobcats made key contributions in the big win. Fullback Case Singleton answered an opening touchdown drive by East Chambers with a 55-yard touchdown run for Orangefield to tie the score. Halfback Cameron Dischler rushed for 215 yards and two touchdowns.

On defense Jackson Humplik punched the ball from the grasp of a Buccaneer runner. Humplik had the ball bounce back into his hands, and he ran about 25 yards for an important score for the Bobcats.

In the closing minutes East Chambers drove deep into Orangefield territory threatening to tie the game or take the lead. The Bobcat defense made a huge stop on fourth-and-one at the ten to secure the victory for Orangefield.

Celebrations for the big win have to be brief because the playoffs start this week. Smalley explained, "It was a history making victory for us, but now it's a new season and none of that really matters because we going into a season where everybody has the same record. You win you get to keep playing, you lose you're packing up your pads."

The Bi-District round of the state playoffs will feature a re-match for the Orangefield Bobcats against the Shepherd Pirates. The Bobcats defeated the Pirates in Week 3 of the season 48-28 at Orangefield.

Shepherd is the fourth seed in District 9-3A finishing the season at 5-5 and 3-3 in district. The Pirates won two pivotal games late in the district against Coldspring and Huntington to make the playoffs.

The Pirates operate out of the shotgun on offense but not out of the Spread in what they call the Gun Wing. Shepherd uses a tight end or H Back in their shotgun instead of four or five wide receivers and will run more than it passes the football.

Pirate quarterback HD Green is a senior and a legitimate speed threat at 10.6 in the hundred meter when he runs the ball. Last season Green rushed for 1,046 yards and accounted for 20 touchdowns. He has matched those numbers this season with 1,198 yards and 19 touchdowns. "Green's a guy that once he breaks into the open usually their band starts to play the fight song since he's hard to catch," Smalley appraised.

Sophomore Preston Stephens is a quality running back to supplement Green. Stephens like Green has over a thousand yards rushing this season and has scored 13 touchdowns himself.

When Shepherd does throw the football Green likes to look towards Hayden Pawlowski. He is a tall wide out who has only caught 3 passes but all of them resulted in touchdowns averaging 28 yards per catch. Luke Moore has 12 receptions to lead the Pirates.

The running game is the primary emphasis for Shepherd. Linemen Blake Frerichs and Triston Major will pull to lead buck sweeps.

Smalley indicated the Pirate offense has gotten much better since Week 3 when the two teams last played. Smalley described, "They run a lot of power with the fullback kick out, guards pull. It is a power offense based out of the Shotgun, and they do a very good job at it and they're well coached. The last time we played them the Pirates rushed for 250 yards on us, so that's a legit threat and we've got to stop that. We can't have that again if we plan on having success."

Defensively Shepherd bases out of a four-man front. The Pirates have used a five-man front against other running teams like Coldspring, although they did stick with their four-man front in the earlier game at Orangefield. Coach Smalley said he and his coaches are expecting the unexpected from Shepherd and will prepare Orangefield for both fronts in this game since the Bobcats ran the ball very well in the first meeting and the Pirates may look to change things up this time.

Inside linebackers Sheldon Ferguson and Tanner Lacey standout on the Pirate defense. Lacey was all-district last season. On the outside is Devon Wyatt at end or outside linebacker who is very good in the box for Shepherd.

Junior Jacob Guidry in the defensive line is another Pirate who the Bobcats need to block on every play. The secondary is led by the very athletic HD Green who can play cornerback and safety.

The Pirates are an attacking defense. They do not sit and wait according to Smalley. "The Pirates like to blitz linebackers through the A and B gaps. They like to put pressure on your offensive line to pick up stuff and cause havoc in the backfield. They're well coached and they're familiar with us because we have played them probably six times in non-district over the last eleven years, and now we're playing them twice this year," Smalley reminded.

The keys for the Bobcats never change whether it is early in the season, district games, or in the playoffs. Turnovers must be avoided by Orangefield while also creating take aways with its defense. The Bobcats' penalties need to be kept to a minimum to allow for time consuming drives by the offense. Smalley emphasized, "You've got to play mistake free football, and it comes down to containing their running game especially Green who is a huge threat which means tackling well in space which we need to get better at that."

It was 2015 when Orangefield last won a playoff game in the Bi-District round. The Bobcats have never won a game in the second round of the playoffs, but Smalley is hopeful they can change their playoff fortunes this year. "It's been a while since we've had success of getting past the Bi-District round. I think that's something these Bobcats want to do and it's obviously important but we have to play better than we did last week if that's going to happen," Smalley concluded.

The game between the Orangefield Bobcats and the Shepherd Pirates will be played at the Sheldon ISD Stadium off of Beltway 8 northeast of Houston. The kickoff will be at 7:00 PM on Thursday.