Lady Bobcats eliminated by Danbury in Area Round 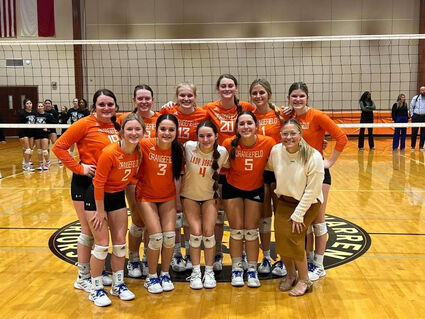 A successful season for the Orangefield Lady Bobcats volleyball team came to an end Thursday, November 3, in Channelview. The Danbury Lady Panthers eliminated Orangefield in a five set Area Round match of the playoffs.

The Lady Bobcats advanced to the Area Round with a win in the Bi-District Round over the Huntington Lady Devils on Tuesday, November 1, at Warren. Orangefield took the match in four sets.

The first set was dominated by the Lady Bobcats. They took the set 25-11. The second set was much tighter with Orangefield needing extra points to win 26-24 to go up two sets to none. Huntington responded winning the third set 25-20 to extend the match. The Lady Bobcats closed it out with another solid performance winning 25-19 in the fourth set.

Senior Mackenzie Haley had 14 kills, 20 digs, and 3 aces to help the Lady Bobcats gain the victory. Brianna Moore tied for the team lead in aces with 3 and tied Harleigh Rawls for the most assists as both had 20 in the match. Rawls also had a team high 22 digs.

In the Area Round match Orangefield dropped the first two sets to Danbury 25-16 and 25-18. The Lady Bobcats rebounded winning a tight third set 25-22 before grabbing the fourth set 25-13 to force a deciding set. To their credit the Lady Panthers grabbed an early lead and captured the set 15-6 to advance to the third round of the state playoffs.

The Lady Bobcat seniors all played well in their final match. Harleigh Rawls led in digs with 31 and assists with 23 while adding 8 kills. Mackenzie Haley had the most kills with 10 while adding 22 digs. Kylie Mouton had 9 kills and 2 blocks. Libby Thurman served the only ace for Orangefield and had 22 digs. Other standouts for the Lady Bobcats were Greenlea Oldham with 8 kills and 2 blocks, and Brianna Moore with 20 assists.

The Orangefield Lady Bobcats under Coach Ashlee Peevey finished their season as Bi-District Champions. Their overall record was 28-13 for the year.