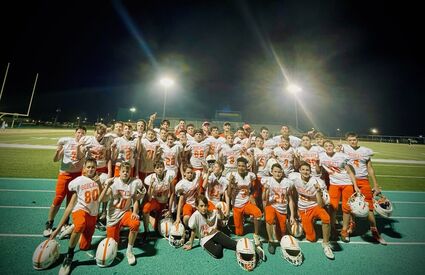 Last Friday, the OJH Bobcats got to play underneath the Friday night lights to finish out their seasons.

The 8th grade played first this week due to a rainout last week. This group made some serious improvements lately, and they were looking to end the season on a high note. Unfortunately, the 8th grade team lost 47-20, but came away with several highlights. Offensively, there were several big plays made by Carson Gonzales, Cole Sanches, and Elijah Jones. Sanches jump-started the offense with a 25-yard touchdown run, where he made a ship full of Buccaneers miss their tackles. Gonzales and Jones each turned on the jets for runs of 69 and 64 yards, respectively, around the edge. On the defensive side of the ball, Jackson Luker had a nice fumble recovery and Stephen Kelly had a miraculous interception. This group has had a rollercoaster season, but they finished strong and never gave up.

The 7th grade group took the field next to finish their goal of becoming the undefeated district champions. The offense started off slow, but found their footing in the second quarter. Jaxon Agerton kicked-started the team with a 2-yard plunge that was set up by a 42-yard run from Gage Lucas. Next to score from seven yards out was Hunter Reeves, who bulldozed his way through would-be tacklers all night long. The last touchdown of the night came from Lucas, who used his speed to burn everyone around the edge. Hunter Block was another offensive standout. He ran all over the field, gaining as many yards as he wanted, and the Bucs had no answer for him. The defense put up another shutout, and never allowed the Bucs to get close. Big hitters of the night were Korbin Smith, Dacius Lytle, and Case Comeaux. Caleb Hebert recovered a fumble to keep the turnover streak alive. This 24-0 win capped off a great season and gave the Cats their District title.