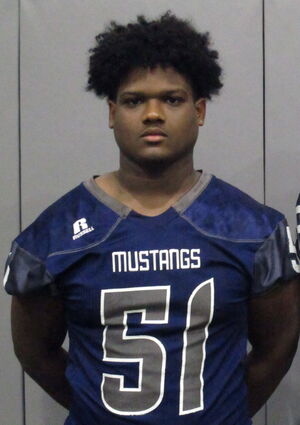 A resounding win in the district finale has West Orange-Stark thinking positive with the playoffs starting this week. The Mustangs have a familiar opponent in the first round of the post season.

West Orange-Stark rolled 53-7 over the Hardin-Jefferson Hawks last week at Dan R. Hooks Stadium. The Mustangs evened their record at 5-5 for the season and finished the district with a 3-3 mark which makes them the fourth seed in District 9-4A Division II.

Coach Hiawatha Hickman said it was a good night for the Mustangs especially on offense. "The offensive line played very well in their execution. They're starting to peak at the right time. We threw the ball well and we ran it well on offense. I thought we had a real productive night, we were real balanced, and that's kind of what we've been looking for is some balance. We think we're going to have to throw the ball in the playoffs to advance. We're going to have to do both," Hickman advised.

Sophomore quarterback Marcus Turner took a step forward for the Mustangs with a good game throwing the football. Members of his offensive line Joshua Miller, Joshua Sterling, and Andrew Wilson were all recognized for their good work by Coach Hickman.

Defensively the Mustangs gave up a few plays to the Hawks' passing game but played very well against the run. Clayton Whatley played well at defensive end. At linebacker Deshawn Brunson played strong in the middle of the WOS defense. In the secondary Da'Marion Scott and Dakarion Judge were standouts.

Hickman reiterated it was a good night for West Orange-Stark football. "We sealed the deal on making the playoffs a reality. Around here we're not where we normally are, but hey we're in the dance and that's all you need," Hickman responded.

Entering the playoffs the Mustangs are as healthy as they have been since before the game with Little Cypress-Mauriceville in Week 2 of the season. Everybody should be available for West Orange-Stark in this week's game of the playoffs.

The opponent for the Mustangs is a team they have faced three of the last four years in the post season the Bellville Brahmas. Undefeated on their season the Brahmas are the district champions from District 10-4A Division II.

On offense Bellville runs the Slot-T which is very similar to what the Mustangs' former district opponent the Orangefield Bobcats use. Hickman joked, "I call Bellville kind of Orangefield on steroids. They've got a few more skilled guys that can hurt you." The Brahmas run the buck sweep, the trap, and the bootleg pass like most Slot-T teams.

Having played against each other so frequently in the playoffs Hickman and his coaches are very familiar with the Brahmas offensive personnel. The reverse is true with Bellville's knowledge of the Mustangs.

The top runner for Bellville is Sam Hranicky a junior who has played on the varsity since he was a freshman. Hranicky has rushed for 1,207 yards and 11 touchdowns to lead the Brahma running game and will line up in different running back positions in the Slot-T.

Like most Slot-T teams the Brahmas spread the ball around between several good backs. DD Murray has 499 yards with 8 touchdowns, Corrian Hood has gained 480 yards for 10 touchdowns, and Tanner Knode leads the team with 12 rushing touchdowns.

Bellville quarterback Reid McCann does not run a lot but can be a dangerous passer. "McCann played against us last year and had some success. He hit us on a couple of deep balls," Hickman reminded.

The Brahmas like to run behind their tight end Bucky Koy and tackle Marcus Smith. Hickman added, "They travel together, and they block down the edge. They're good, those are their two best linemen. I remember them from last year when I was the defensive coordinator and D-line coach."

On defense Bellville will line up in an even front with a 4-3 look and a cover three in the secondary. The Brahmas almost never vary from that formation.

The best Brahma on defense is DJ Sanders at defensive end. Sanders was only a freshman last year but is an outstanding player who had 75 tackles, 10 sacks, was honorable mention all-state, and must be accounted for every snap by the Mustangs in their run game.

At linebacker is Connor Gaines who controls the middle for Bellville. Gaines was called a tackling machine by Coach Hickman. Safety Brandon Ward has moved to Bellville from Brenham and is really good player.

Hickman compared the Bellville defense to two of the outstanding defenses in the Mustangs' district. "I think they're on the same level defensively probably like Silsbee or probably Hamshire-Fannett. They don't do the same things it's a different approach. Those four guys up front for Bellville are big run stoppers where as Silsbee and Hamshire-Fannett do it with the blitzes," Hickman analyzed.

Bellville will line up in their normal defensive formation daring opposing offenses to move them. Hickman responded, "They leave a lot of room for us to take some shots and get into space. Going by what we did the last few years we feel good about it."

The biggest difference for this the third meeting in four years between West Orange-Stark and Bellville is the timing. Normally, the two teams have not met until a later round of the playoffs, not the first round.

What has to be considered a disappointing season so far for the Mustangs could change to the positive for them with a win over the undefeated Brahmas. "If we get a win against a team like Bellville I won't say it salvages our whole season but it'll put us where we expect to be. We haven't had success in the big games on the road this season, but we expect to win this game. We win this game we don't feel like we're a four seed. We feel like our district is probably the toughest in the region. I feel like that we'll go into this game and play it like if we're the one seed. We're just trying to win it and advance that's what it's all about at this time surviving and advancing," Hickman concluded.

The rivalry between the West Orange-Stark Mustangs and the Bellville Brahmas is renewed on Friday. The game starts at 7:30 PM in Splendora.