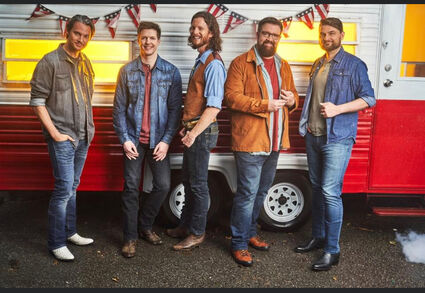 The Lutcher Theater on Tuesday announced the a capella singing group Home Free, which includes a Nederland native, will present a concert on Sunday, February 19, at 7 p.m. Tickets will go on sale Monday, November 21, at 8:30 a.m.

Home Free won the fourth season of NBC's The Sing-Off. The top prize was $100,000 plus a Sony recording contract. Since then, the group has released albums and performed with stars like Kenny VIP lam

The group competed as a country group, but also sings a variety of pop songs, often with a Nashville sound.

The theater will have 14 VIP tickets for an "ultimate experience" with the group for $249.50. The package includes a VIP laminated show pass with lanyard, a commemorative poster, an exclusive swag item, individual photo ops with all five members, an autograph session, a group question and answer session, a private performance of one song, plus crowd-free merchandise shopping.

Also, a limited 80 special tickets for $59 will be available. Those tickets will include a commemorative laminated show pass and lanyard, a show poster, a group question and answer session, one private song performance by the group, and crowd-free merchandise shopping.

More information on the special packages can be found by calling the Lutcher Theater box office at 409-886-5535.