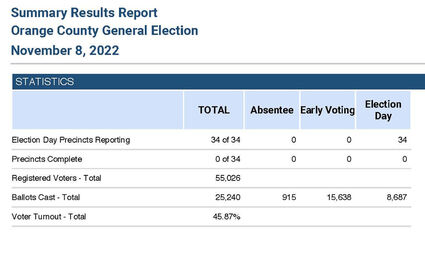 The final results of the November 8 general election shows that nearly 46 percent of registered voters in Orange County cast a ballot. The county in the last census had a population of 84,800. The county elections administration office reports 55,026 people are registered to vote. In this election 25,240 people voted.

The Little Cypress-Mauriceville CISD had a Voter Approved Tax Election to have citizens vote on a 12-cent tax increase for the maintenance and operations category. School officials said the total tax bill would go down, even if the M&O tax increase was approved, because the district had paid off some of its bond loans and the indebtedness tax rate is going down.

However, taxpayers did not go for paying more.A total of 6,234 people voted in the LC-M tax proposal election with a resounding 3,674 people against the increase, and 2,560 for paying more. The district said the increase would raise about $1 million more in local tax money, plus the state would pay another $1 million more, giving a total increase of $2 million in local spending.

The Orange County Tax Assessor-Collector's office will now be mailing out tax bills to the people living in the LC-M CISD. Other tax bills in the county were mailed in October, but the office had to wait for the election to see what the tax rate for the school district would be. Taxes are due by January 31.

In Emergency Services District 1, which is for the city of Vidor and its surrounding areas, seven people ran for the five positions. A total of 11,938 people voted in the election. Those elected and their votes are John H. Houseman with 2,838, Jerry Aldridge with 2,211, Gene Domec with 1,855, Wyatt Boyett with 1,424, and Nelda Nash with 1,331. The other two candidates were Larry C. Williams III with 1,318, and Kenneth Luce wtih 961.

Emergency Services District 2 covers the city of Bridge City and the Orangefield area. A total of 10,526 voted in the election. Six candidates ran for the five positions. The board members are Glen Childers Jr. with 2,163, Scott Barnes with 2,027, Chris Landry with 1,994, Carroll LeBlanc with 1,739, and Wes Arnold with 1,417. Aaron McNeil received 1,186 votes.

Emergency Services District 3 covers the unincorporated Little Cypress area. Five candidates were on the ballot and won election with a total of 3,487 people voting. Cammie Manshack Vincent led with 775 votes, Wayne LaCombe had 754, Cathy Drake had 466, Wesley Journeay had 446, and Corina Alonso had 335. The district had 55 write-in votes with Chris Jagneaux receiving 32 of the write-in votes.

Emergency Services District 4 is for the Mauriceville-McLewis areas and a total of 6,538 people voted in the election. Five candidates were on the ballot with all being elected. David Jones had the most with 1,578, followed by Dan Brack with 1,454, Anthony Shue with 1,316, David Covey with 1,147, and Robert H. Hymes with 1,043.

In the race for governor, incumbent Republican Greg Abbott had 21,138 Orange County votes with Beto O'Rourke getting 3,715. Abbott won statewide.

For the U.S. Representative race, incumbent Republican Randy Weberhad 21,115 votes, with Democratic challenger Mikal Williams getting 3,747 in Orange County. Weber was reelected in the district.