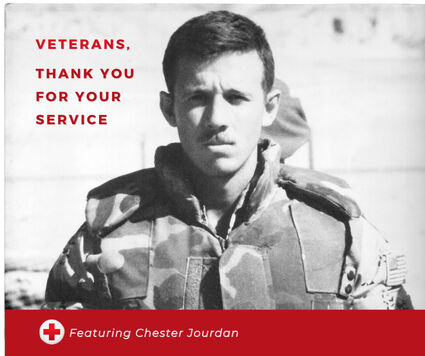 Friday, November, 11 2022 — This Veterans Day, November 11, 2022, the American Red Cross is recognizing veterans who continue their service in local communities across the country like Southeast and Deep East Executive Director Chester Jourdan Jr.

His wife, Cheryl, went into labor three weeks early, and while out on patrol during deployment, his command received a call from the American Red Cross to inform Jourdan his wife gave birth to a healthy baby girl. One month later, Jourdan returned home to be reunited with his wife and meet his daughter, Casey.

After his time in the military, Jourdan received his undergraduate from Stephen F. Austin University in Nacogdoches, Texas, and went on to obtain his master’s from the University of Texas in Arlington. In 2000, he became the Executive Director of the Southeast Texas Regional Planning Commission after working for over a decade in the Federal Government.

His role required working closely with the local American Red Cross chapter. When Hurricane Rita and Katrina hit, they were able to provide services to 27,000 Hurricane Katrina evacuees. Only three weeks after Hurricane Katrina, Hurricane Rita struck causing damage to Jourdan’s home and community. A year later, he took a position in Columbus, Ohio, for six years before returning to his roots. He became the Executive Director serving 17 counties for the Southeast and Deep East Texas Red Cross Chapter in 2014.

“This is where I live, this is where I was raised,” said Jourdan. “My family has been in Deep East Texas for over seven generations, and so it was a natural fit. It’s not only a job for us, but it’s our family, as well as the folks we know, grew up with and live next to.”

As Executive Director, Jourdan’s the voice of the chapter. He provides information on organizations that offer different services and advocates for the organization, community, and volunteers. When not working in the district, Jourdan deploys all over the nation as an Elected Official Liaison to participate in Disaster Relief Services. He also supports Services to the Armed Forces and works with various Veteran Related Organizations to continue giving back.

Jourdan was born in San Antonio on the Air Force Base while his father was stationed there. He was raised in Jasper, Texas, and graduated from Jasper High School. His youngest daughter, Callie is a graduate student and softball player at Ouachita Baptist University in Arkadelphia, Arkansas, while his oldest, Casey teaches for Port Neches School District. Callie is hoping to follow in her sister’s footsteps in becoming a teach

Many Red Cross volunteers are veterans who continue to support their communities after their active-duty service ends. From the front lines of disaster recovery to service in Veterans Administration (VA) and military hospitals across the nation and around the world, their impact is integral to the Red Cross.

WHAT YOU CAN DO

Volunteer to help veterans or to work alongside them to make our communities stronger. To learn more about how you can give back in your community this Veterans Day, visit redcross.org/volunteer.