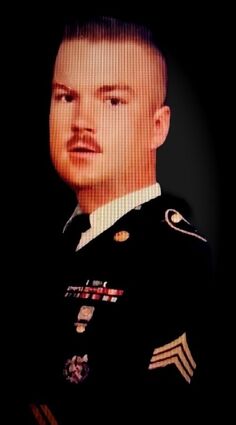 Sergeant Adam Yeah Bates, a proud veteran of the United States Army, passed away on November 3, 2022, at his home.

Adam was 59 yrs. old and a resident of Mauriceville, Texas. Aside from his family, Adam’s greatest devotion was to the military and his country, honorably serving 10 years, 1 month and 21 days in the Army.

Adam was born in Alliance, Ohio, on July 25, 1963, to the parents of Charles Heck and Mary (Rutan) Wright. His mother passed away at a young age leaving Adam to be raised by his brother Robert, who he loved dearly.

On June 6, 1982, he was able to graduate with honors with a 4.0 GPA at Beaver Local High School in Columbiana County, Ohio. Adam felt the strong desire and call to serve his country and enlisted in the Army after graduation. Adam began his military career at Fort Hood, Texas as a Radio Teletype Operator with the 169th Maintenance Battalion (GS) before achieving his rank as Private First Class on June 1, 1983, Adam also served with the 13th Support Command (Corps). He earned recognition for his dedication and outstanding performance; it was here at Fort Hood where Adam’s love for all things “radio” was born. Among many roles and calls to service, Adam was honored to serve in Korea, earning his rank as Sergeant on May 5, 1985, and subsequently his promotion to (E5). Adam returned to the States to serve at Fort Drum, New York where he earned the recognition for his military bearing, attention to detail, dedication, and outstanding performance. vcAdam’s final years in the Army was served in Houston, Texas with the United States Army Recruiting Battalion where he earned the elite achievement of becoming a member of the Colonel’s Squad for RSM. In addition to his unwavering commitment and devotion to duty, he was also recognized for his contribution of his personal time as a member of the Houston Battalion Color Guard. Adam was consistently recognized throughout his military career for encompassing and demonstrating the core values of what it takes to be a soldier by continuously exceeding and surpassing the bar on his missions and ultimately becoming the embodiment of a true leader. Adam found a renewed spirit when he met his wife, Tina, in November of 2013. They had a whirlwind romance that resulted in marriage on February 23, 2019, and a happy extension of his family including 12 new siblings who loved Adam’s respect for his wife and his southern humor. Adam’s wit and charm was not lost on his wife who was able to match his banter with ease. Their adoration and love for one another could be witnessed when you would catch a glimpse of them looking at each other.

Adam was a master craftsman and jack of all trades personally building his house from the bottom up and moving to Mauriceville in 1994. Adam could be found out in his shop listening to his CB radio under his handle “Big Bubba”, blaring classic rock for the entire neighborhood from his impressive stereo equipment, completing one of his many car models, or working on his fox body Mustangs. If you woke early enough, you could steal a glimpse of him completing an entire crossword puzzle in record timing while sipping his coffee on the porch. Adam took extreme pride in maintaining his household and especially in his yard maintenance which he executed with military precision and thoroughness. His riding lawn mowers throughout the years have more mileage than any vehicle he’s ever owned combined. Nobody dared questioned, and everyone grew to love and respect, the sight of Big Bubba or Mr. Adam, as many others knew him, riding down Highway 62 on his riding lawn mower. One of Adam’s most cherished times were with his first grandson whom he affectionately referred to as Bill Bill, who passed away on May 30, 2011, at the tender age of 5. While it’s widely known that Adam raised his daughters to be the sons he never had, Lil’ Billy did in fact fill that role. They would be found together in Adam’s shop either with Lil’ Billy squatting down in his diaper holding a wrench for his Pappy or with Pappy holding a pair of hair clippers giving Lil’ Billy a high and tight.

In most recent years, Adam put down the CB radios and Mustangs and instead picked up grandchildren. He spent his time building a play house and getting schooled about politics and academics by Lily (8 yrs. old), and Colt (6 yrs. old); helping shop for cars and making Talan (16 yrs. old) laugh and blush at his Army stories; blowing kisses at Dwight (4 yrs. old) only to have him dramatically wipe them away; snuggling and being “Pappy’s girls” with Vera Ellie (1.5 yrs. old) and Suelea (6 yrs. old); working in the yard with Trevor (9 yrs. old); and giving everyone of them the chance for a ride on his lawn mower. Pappy’s favorite past time with his grandchildren was picking out the latest and greatest fireworks for his annual Fourth of July celebration.

Adam was a devoted husband, cherished and adored father and grandfather, honored brother, and a staple within his community. His larger-than-life persona captivated the hearts of anyone who knew him. His resilience, kind and loving heart, and fierce protective nature is awe inspiring and will be dearly missed. Adam’s mere presence felt like home for so many people. He was called Home to serve his last assignment for America without her soldiers would be like God without His angels. You have truly proven worthy of the title “Best of the Best.” – Alfonso E. Lenhardt, Brigadier General, Deputy Commanding General (21 JAN 92)

He is preceded in death by his parents; his aunt; and his grandson, Billy “Bill Bill” Lawwill, III.