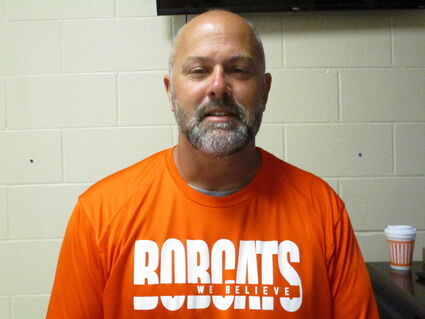 This football season began with optimism at Orangefield after the University Interscholastic League reclassified the Bobcats from 4A down to 3A where they could compete with other schools comparable to their number of students. In preparation for an Area Round playoff game this week the optimism has transformed to genuine belief the Bobcats are a really good football team this year.

Last week Orangefield won a playoff game for the first time since 2015. The Bobcats smashed the Shepherd Pirates 55-12 to capture the Bi-District championship. Orangefield also defeated Shepherd in a Week 3 non-district game, but the playoff win was more decisive and significant being the first one in seven seasons for the Bobcats.

Coach Josh Smalley is proud of the win by Orangefield earning the Bi-District championship. "We held Shepherd to 12 points that's pretty good in the bi-district round then offensively I thought we kind of controlled the game with our running attack," Smalley recapped.

The Bobcats rushed for over 450 yards in the game. Cameron Dischler and Gavin Perry-Koci both totaled about 200 yards apiece. The two also combined for six touchdowns. Case Singleton and Brayden Parker added touchdowns to help Orangefield achieve the victory.

A lot of the credit for the big win goes to the Bobcat offensive line. Smalley praised, "The offensively line blocked really well. Our two tight ends Koen Maddox and Morgan Sampson really stood out as far as blocking up front."

Despite the impressive win by the Bobcats there are still areas that need improvement. "We turned the ball over which is never good in the playoffs, and then we had a couple penalties, but nothing big there. I'm very proud of our coaching staff and the game plan they put together and very proud of the kids for going out and executing it. We get to play one more week at least," Smalley reminded.

This week is the Area Round of the state football playoffs. Orangefield plays the Cameron Yoemen on Friday. Cameron Yoe finished as the second seed in District 11-3A, Division I behind Franklin which is ranked number one for Class 3A in the state.

The Yoemen use a high octane passing attack on offense. The Spread is the formation and it is a true Spread with usually four receivers split to either side of the line scrimmage. Cameron Yoe throws the ball about 80 percent of the time and averages scoring over 42 points a game.

Quarterback Braylan Drake is a junior. Drake has passed for 2,179 yards and 27 touchdowns. He has completed 65 percent of his 245 passes and only thrown five interceptions. Seven different Yoemen receivers have caught one or more touchdown passes and each of them has at least eleven receptions in their eleven games played so far.

Drake's favorite receiver is Trayjen Wilcox who has 52 receptions for 680 yards with 6 touchdowns. Lining up as a slot receiver Wilcox is small in stature but is fast and hard to put a finger on when he catches the ball in space according to Coach Smalley. Charlie Mayer is the second leading receiver with 26 catches and is the leader with 10 for scores.

Although running the ball is secondary to passing it for Cameron Yoe, the Yoemen do have some quality backs. The leading ground gainer is Kardarius Bradley with 831 yards and 12 rushing touchdowns. Armando Reyes has run the ball for over 300 yards with 9 touchdowns. On short yardage the Yoemen will use their big back Tavares Crittendon to pound the ball.

The offensive line is large for Cameron Yoe. Left tackle Colby Wilson is big physically at 6-6 about 300 pounds and is the leader in the offensive front line for the Yoemen.

Slowing the Cameron Yoe offense will be a big challenge for the Bobcats' defense. Smalley compared the Yoeman's Spread offense to the one the West Orange-Stark Mustangs employed when they were in the same district as Orangefield and to the Bridge City Cardinals when he coached there under Cris Stump. The Yoemen use a lot of five-yard bubble routes, some deep post patterns, and long out and up plays.

Smalley elaborated on the Cameron Yoe offense. "They're well coached offensively. It will be something we haven't really had an opportunity to face this year in our eleven games of just a true Spread that spreads you out to read your coverage have combination routes that our secondary has not had to adjust to since Woodville and Bridge City which were a long time ago early in the season. It's going to be a challenge for our defensive coaches to come up with a good plan and a challenge for our kids to be able to stop a very potent Yoemen offense," Smalley analyzed.

Rick Rhoades is the head coach at Cameron Yoe. Rhoades coached the Yoemen a decade ago when they won three straight state championships. Smalley commented, "He's a seasoned head coach. He knows what he's doing, and you're not going to trick him. It means us coming up with a good game plan and getting it executed on Friday."

The offense is the main reason Cameron Yoe has made it to the second round of the post season. The Yoemen do play hard on defense but they have surrendered 361 points in eleven games.

Cameron Yoe uses a 3-4 alignment similar to the defense used by Orangefield. Previously the Yoemen did shift into more of a 6-2 defense with eight defenders in the box against state ranked Slot-T running teams Bellville and Franklin so they may do the same against the Bobcats. The Yoemen lost both of those games giving up 49 points to Bellville and 63 to Franklin.

In the middle of the 3-4 is noseguard Samari Ware who is a good player. Keshon Johnson may be the Yeomen's best defensive lineman.

Inside linebackers Tyrone Miller and Tavares Crittendon support Ware in the middle very well. Outside linebacker Armando Reyes is a strong tackler.

The best player on the Cameron Yoe defense may be Ja'Quorius Hardman at safety. Hardman appears to be all over the field defending against passes and coming downhill to make tackles on ball carriers. Kason Goolsby leads the team with 3 interceptions one more than Hardman and Trayjen Wilcox their best receiver who also plays defense.

Smalley is not taking anything for granted against the defense of Cameron Yoe. "They're a reading type defense. The Yoemen don't do a whole lot of blitzing, but will with a linebacker inside at times. They like to read and then react by running to the football. They are really good at doing that. We see a lot of this type front, so it will be a challenge to our offensive coaching staff to come up with a good plan to put our best players against who we feel like may be their weaker players if they have any at all. Second round of the playoffs you don't find a whole lot of weak players. We'll try to take advantage of some things that we think will go our way," Smalley stated.

The keys for an Orangefield victory will be a little different this week especially on defense. Last week the emphasis was stopping the run game of Shepherd. The main focus for the Bobcats on this Friday will be controlling the Cameron Yoe passing offense. Smalley admitted, "Our secondary will be a lot more involved this week than they have been the last couple weeks. We've got to put pressure on Drake we can't let him escape the pocket and run because when he gets out and breaks containment that's bad news for us. We've got to cover well and be physical in the secondary."

Smalley is hopeful the Bobcats' offense could be their best defense by keeping the Yoemen's offense on the sideline. "We've got to keep moving forward. We might not break off 40, 50, or 60 yard long touchdown runs, it may be three, four, or five yards at a time and just milking the clock in a slow painful death for them. The game's going to be different, it's going to be cold. Our mental toughness is going to come into play. How mentally tough are we to not only try to overcome a good opponent but also the elements that we're playing in. Mental toughness is something we can try to hang our hat on around here. We've got a little saying, we say TPO, that means Tough People Only, and those are the kind of kids we want in our program," Smalley concluded.

The Area Round playoff game between the Orangefield Bobcats and the Cameron Yoemen will be Friday. The kickoff is scheduled for 7:00 PM in Alvin at Freedom Field.