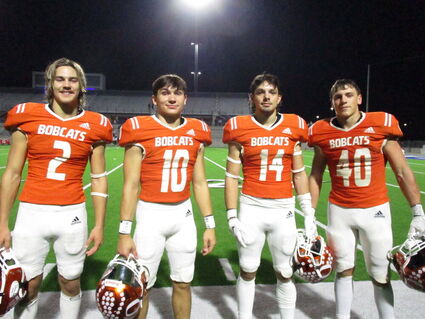 Orangefield got touchdowns from Case Singleton, Brayden Parker, Gavin Perry-Koci, and Cameron Dischler in the Bobcat's 55-12 win over Shepherd

For the second time this season the Orangefield Bobcats played the Shepherd Pirates on Thursday, November 10. The Bobcats have won both games and Thursday's was a Bi-District victory 55-12 at Panther Stadium in the Sheldon Independent School District.

The Bobcats established their dominance early scoring on their initial five possessions of the first half. Two fumble recoveries helped Orangefield take an insurmountable 35-6 lead by halftime.

Taking the opening kickoff the Bobcats needed just four plays to open the scoring. Gavin Perry-Koci ran 23 yards on the first play from scrimmage, Case Singleton scored three plays later on a 26-yard burst with not even 90 seconds gone in the game.

Shepherd lining up in the shotgun had a poor snap get past quarterback HD Green on the Pirates' second play. The Bobcats' Koen Maddox recovered at the Shepherd 18 yard line.

Three runs setup a first-and-goal at the one where Bobcat quarterback Brayden Parker ran it in for a touchdown. Orangefield missed the first extra point but Parker converted the two-pointer with a run to give the Bobcats a 14 point lead with 7:52 remaining in the opening quarter.

The Pirates generated some offense on their next drive moving into Bobcat territory on an 18-yard scamper by Green. Shepherd went for it on fourth-and-one but Green was tackled for a yard loss turning the ball over on downs to Orangefield.

The next play Perry-Koci broke loose off of left tackle and sprinted down the side line for a 58-yard touchdown. Ty Butler added the extra point to make it 21-0 at the 3:54 mark of the first quarter.

It was the Pirates turn to show some offense with Green completing his first two passes of the night to Luke Moore and Preston Stephens both resulting in first downs. Stephens carried the ball three straight times after his reception totaling 26 yards getting the touchdown on a 2-yard trap off left guard. Green tried to run for the conversion but was stopped by the Bobcats keeping the score 21-6 just 34 seconds into the second period.

Orangefield responded with an eight play drive. Cameron Dischler caught a lateral pass that he carried for 9 yards and sandwiched another 9-yard gain around a first down carry by Singleton. Perry-Koci gained 13 yards moving the ball to the Shepherd 33.

Two straight run plays resulted in losses for Orangefield before Dischler picked up 13 yards to setup a fourth-and-one at the 24. Dischler found an opening off of right tackle and sprinted to the end zone getting the first down with his first of four touchdowns on the night.

The ensuing kickoff was fumbled by the Pirates, and Mason Manning of the Bobcats recovered the ball near the sideline before it could roll out of bounds at the Shepherd 27.

Parker quarterback sneaked for a first on fourth-and-one to the Pirates' 16. Dischler got the ball 8 yard closer before Perry-Koci scored his second touchdown of the game from the 8 to make the score 35-6 with five minutes left in the second quarter. Orangefield got the ball one more time before the end of the half but punted for the only time in the game.

The second half started like Shepherd was going to make some progress to make the score closer. The Pirates got two first downs and moved from their 42 to the Bobcat 16.

From the 11 Shepherd had a fourth-and-5 for an important first down to keep the drive alive. The Pirates tried some trickery with a reverse to wide out Hayden Pawlowski. The Bobcats were ready and stopped Pawlowski for a yard loss spoiling the scoring opportunity for the Pirates.

Runs by Singleton and Dischler earned a first down to the 33 before Perry-Koci sliced through again for a 51-yard gain to the Shepherd 16. Two plays later Dischler swept to the right for 15 yards and the touchdown to increase the Orangefield lead to 41-6 just over six minutes into the third quarter.

A fumbled handoff by the Bobcats was recovered by the Pirates' Luke Moore at the Orangefield 41. Moore and Green hooked up on a 17-yard pass. Stephens ran 13 yards for another first down before Green scored on a 16-yard dash for Shepherd. The pass attempt for two points was stopped short of the goal line leaving the score 41-12 in favor of the Bobcats late in the third period.

Dischler scored two more times in the fourth quarter for Orangefield. The first was a spectacular 24-yard run where he dodged multiple Pirate tacklers. The second play Dischler ran to his right before making a sharp cutback to his left to go 30 yards for the touchdown.

On the night Dischler totaled right at 200 yards on 20 carries with his four touchdowns. Perry-Koci ran the ball 11 times good for 198 yards and two touchdowns. Singleton gained 51 yards on his 6 runs. The Bobcats as a team picked up 452 yards on the ground.

Shepherd was led by Green who had 120 yards on the ground and passed for 85 yards completing 5 of his 12 passes. Stephens had 86 yards rushing on his 16 carries.

This week the Orangefield Bobcats will try to do something they have never done before by winning a second round playoff game. The Bobcats will play Cameron Yoe on Friday in Alvin. The kickoff will be 7:00 PM at Freedom Field.