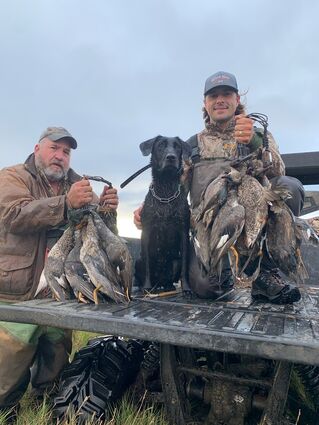 Heavy straps were the norm for most local waterfowl hunters over the weekend.

A steady stream of boats, hunters, and dogs crowded the local launches Saturday

morning as the Louisiana duck season officially opened. Texas hunters continued their hot start from the previous weekend by taking advantage of the big north winds that greeted hunters at shooting light. The high winds made for some fantastic decoying action in marshes all along the southeast Texas and southwest Louisiana marshes. Heavy straps of gadwall, teal, wigeon and shovelers were the norm in many places as most hunters enjoyed some of the best early season hunting in recent memory.

Now if you are fortunate enough to have access to available food sources like rice you can bet you will be sitting pretty throughout the first split. The reports from the Louisiana opener where hunters concentrated on flooded rice were outstanding. Hunters that were much deeper in the marsh and affected less by the saltwater and freshwater ratios had great numbers of birds and solid hunts as well. The hunters closer to the rivers and bayous struggled somewhat but did manage to take a few birds. Teal and Gadwall made up the majority of the ducks taken for most hunters while a few were fortunate enough to take pintail, widgeon, and even a few mallards. The big surge of hunting pressure certainly changed the way the birds worked but it didn't seem to matter as most all the reports were better than expected.

Perhaps the hunters most affected by the opening day pressure were the goose hunters who set up on fields with good populations of speckle bellied geese. Almost every hunter I spoke with who was chasing geese said the birds were really spooky and hard to decoy. Most of the hunters who shot any numbers of birds keyed in on small groups of birds rather than big bunches in order to get

them into shooting range. Look for these birds to also calm down as the hunting pressure evens out. The amount of geese coming into the area on a daily basis certainly gives local hunters something to look forward to. In the weeks ahead a few things are going to become more important as the weather and conditions get progressively colder and more difficult.

For now the long range forecast looks very good for local waterfowl hunters as cooler temps are on the horizon and that's always a welcome change. The strong north winds associated with each front will move a few birds out of the areas but look for those numbers to build back up soon. New birds just now entering our area plus those returning once the big north winds die down and slowly swing south and east will bolster the population. Water levels in the tidal marshes will be a concern for a few days as the tides are extremely low right now courtesy of the north winds associated with this each passing front. Many areas that are prime habitat become expansive mud flats at this time of the year and are only accessible with a surface drive motor or long tail. When the water levels return the ducks won't be far behind. If the first few days are any indication of how the season is going to turn out then it may be time to stock up on shells because this has all the potential to be one to remember.