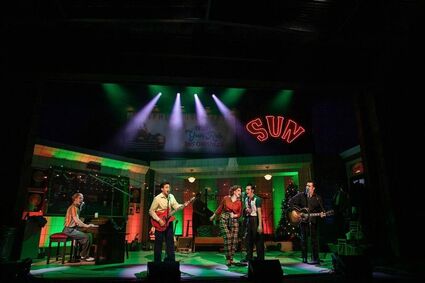 (Orange, Texas) Get ready to rock around the Christmas tree this season as the Lutcher Theater presents "Million Dollar Quartet Christmas!" The heartwarming holiday musical is set to play one night only on November 29 at 7:30 p.m., as part of a 26-city national touring production. Members of the original Million Dollar Quartet team, Tony-nominated book writer Colin Escott and orchestrator Chuck Mead, reunite with director Scott Weinstein for this new musical holiday celebration.

In "Million Dollar Quartet Christmas," rock ‘n’ roll newcomers, and soon to be legends, Johnny Cash, Jerry Lee Lewis, Carl Perkins and Elvis Presley come together again to celebrate the holidays. Inspired by the true story of their December 1956 homecoming at Sun Records, this endearing rock n’ roll musical rings with sounds of the season and the chart toppers that made the Million Dollar Quartet famous. The gang is up to their usual antics as we journey through stories of Christmas past, present and future in a joyful evening filled with nostalgic holiday hits including “Run Rudolph Run,”“Jingle Bell Rock,” “I’ll Be Home For Christmas,” and more.

"Get ready to ring in the holidays at the Lutcher Theater, rock 'n' roll style, with this fun, upbeat, family friendly show. There's going be lots of great music and maybe some dancing in the aisles," said Lynae Sanford, executive director of the Lutcher Theater. "We are going to pay homage to some of music's legends during this production."

Tickets are currently on sale and can be purchased at lutcher.org or by calling the Box Office at 409.886.5535. The Lutcher Theater is located at 707 Main Avenue in Orange, TX.