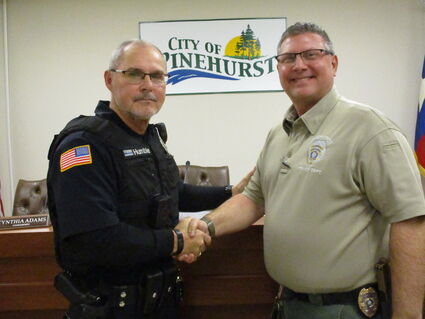 The City of Pinehurst will have a new Chief of Police effective in December of this year. The Pinehurst City Council unanimously named Chris Humbe as their new Police Chief at a special meeting on Monday, November 21.

Humble has served the last six to seven months with the Pinehurst Police Department. Humble replaces Jimmy LeBoeuf who is retiring as the Chief of Police effective December 2, 2022.

Appreciation was the first response from Humble to be named the Chief of Police in Pinehurst. "I know it's going to be a challenge. I know there are some things I'm going to be weak in, but I'm going to depend on some of our other people because they're going to have strong points where I'm weak. I think it's going to work out real well," Humble responded.

The growth of Pinehurst will be mirrored by the growth of its police department. Humble indicated, "We're going to continue to move forward. Fortunately, we've had a good chief in Jimmy LeBoeuf. I've worked with him for twenty years. He started carrying the torch very well, and I'm just planning on hopefully to continue that."

In his thirty years of law enforcement work Humble had served 13 years with the Orange County Sheriff's Office including as a sergeant where he did investigations for six years on crimes against children. Humble worked with all of the school districts in the county regarding that same concern.

After retiring from the Sheriff's Office, Humble was elected the County Constable for Precinct One in Orange County. He served in that position for ten years before again retiring. Humble had previously also worked as a patrolman in north Texas around the Dallas area and with the Orange Police Department.

With his new position Humble does not see a lot of changes in the immediate future of his replacing Chief LeBoeuf. "There's always going to be some different perspectives on things. Everybody comes in with a different perspective, but as far as changing how things are run I think Jimmy set the stage for that, but I'm looking forward to it. I've enjoyed working here. All the folks that will be working with me I have confidence in them, and I just want them to have confidence that I will work to the point where they'll see that I lead by example and they'll have that same confidence in me," Humble stated.

In stepping down after about 19 months as the Police Chief in Pinehurst LeBoeuf is retiring for the third time. LeBoeuf served with the Orange County Sheriff's Office for several decades before retiring the first time to become the director of the regional police academy at the Lamar Institute of Technology (LIT) for two and a half years. After his second retirement from LIT he was retired for about five and a half months before taking the police chief job with the City of Pinehurst.

LeBoeuf believes he leaves the Pinehurst Police Department better than when he took it over and has followed through on improvements started by the previous Pinehurst Police Chief Fred Hanauer. "I've had a really good time here. We've done a lot of good things, we've done a lot of good upgrades to the equipment and personnel with training and some things that we've done so I can definitely say I've left it better than it was when I got here. I've continued to make improvements that Fred had started prior to his retirement, so it's just going to continue on like I did when I took over for Fred now with Chris taking over will do the same thing," LeBoeuf recalled.

This third retirement could be the final one for LeBoeuf. "Well, for this retirement I don't have any other plans except for the schedule that my wife has worked out for me. They're all excited that I'll be home to take care of stuff and take care of them. They're looking forward to it just as much as I am," LeBoeuf concluded.