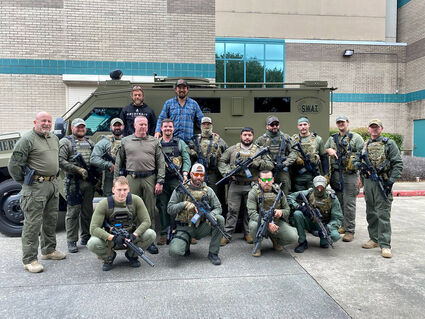 Once, Orange Memorial Hospital, now closed, saved lives. On Friday, the building once again helped save lives, but this time for law enforcement. The building became the training ground for the Orange County Sheriff's Office SWAT team with a simulated hostage situation in close quarters.

"This is a rehearsal and practice for SWAT training in a worst-case scenario in any potential situation," said SWAT Commander Jimmy Smith.

Sheriff Lane Mooney brought in two former military special-ops men who specialize in SWAT rescues to help with the training. Mike Glover from Herber City, Utah, and Rick Lofton work with FieldCraft Survival training law enforcement. This time instead of the rescuers, they played the hostages and wore civilian clothes.

Commander Smith said the vacant hospital area allows the team to work together to help save hostages and take out the kidnappers or shooters. School shootings make a lot of headlines, but the rescues in close quarters training can apply to any potentially lethal situation in a building.

The training in the hospital included using real weapons, including some assault rifles not available to the general public. But instead of live ammunition, the SWAT team used simulated rounds that Smith compared to paint balls in paint ball guns. He said the simulated rounds allow the team members to see their accuracy and how it will affect the rescue effort.

The sheriff's SWAT team has 17 members and they all took part in the hospital training, along with classroom training during the two days Glover and Loftin were in town.

Smith said SWAT team members are chosen from deputies in the sheriff's office. They must have advanced training, go to a special school, be physically fit, and participate in training. 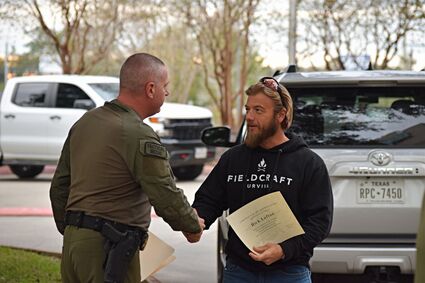 On Friday, the team wore their army green uniforms with some sporting camouflage protection vests. They also brought along the sheriff's new armored vehicle that can be used for hostage rescues.