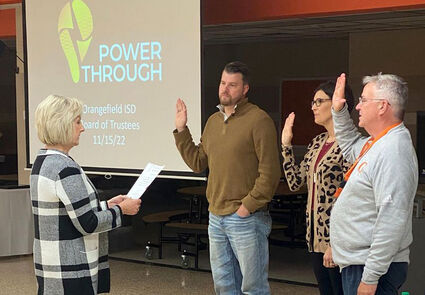 Orangefield ISD gave the oath of office last week to three trustees, including one new one. Kyle Dubose, left, is the new school board member. He is replacing Donovan Weldon, who decided not to run again for the position after serving 19 years on the board. Weldon during his tenure helped with the 2003 bond election along with working on recovery after hurricanes Rita, Ike, and Harvey. Laura Clark and Marcus Wernig are the returning board members. The district was able to cancel the November board election because the three open positions had no contested races.