Bobcats end their season against Cameron 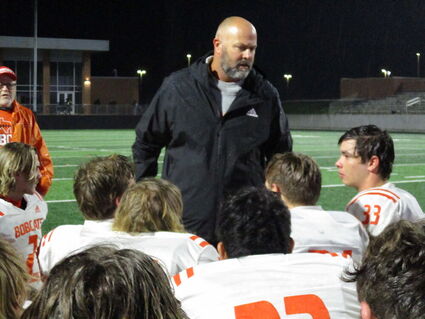 A wonderful season for the Orangefield football team came to an end on Friday night. The Bobcats lost 42-19 to the Cameron Yoemen at Freedom Field in the Alvin School District.

Orangefield (9-3) was trying to win an area round football playoff game for the first time in the school's history and concluded the season as bi-district champions. Cameron Yoe (9-3) with the win advances to the third round of the state playoffs.

The Yoemen used a short passing attack combined with an effective running game to control the clock which limited the Bobcats to just nine possessions on the night. Cameron scored six touchdowns out of the ten times it had the ball.

Credit needs to be given to the Yoemen defense for stopping the normally potent Orangefield running game. The Bobcats gained 162 yards on the ground against Cameron nearly three hundred yards less than what they picked up in their bi-district win over Shepherd last week. "I think they played a lot better defense tonight against us than they've shown and that's a credit to their coaching staff and their kids," Coach Josh Smalley of Orangefield admitted after the game.

The Bobcats took the opening kickoff and punted after three plays. The Yoemen had great field position for the first of four times in the half starting a drive in Orangefield territory. A great defensive play by Orangefield's Koen Maddox stopped Yoemen running back Armando Reyes on a fourth-and-two to get the ball back to the Bobcats.

Another three-and-out gave Cameron the ball at the Orangefield 45. Yoemen quarterback Braylan Drake completed five passes resulting in three first downs and moving the ball to the eight. From there Drake completed a touchdown pass to Charlie Mayer. The kick was missed keeping the score 6-0 with 32 seconds left in the first quarter.

Orangefield was forced to punt after three plays again but the Yoemen's Landen Greene blocked the kick and Reyes returned the ball to the Bobcats' 11. From the pass pocket Drake could not find an open receiver and scrambled seven yards for a touchdown. Drake passed to Trayjen Wilcox for the two point conversion to put Cameron up 14-0 with 9:31 remaining in the second quarter.

For the first time Orangefield generated some offense on its ensuing possession. Cameron Dischler broke loose for 25 yards to the Yoemen's 44 yard line. Five straight carries by Dischler gained 25 more yards as the Bobcats reached the 19.

Two short gains were offset by a procedure penalty on Orangefield setting up fourth-and-eight at the twenty. Dischler was given the ball as if he were running a sweep to the right but pulled up and threw a perfect pass to a wide open Morgan Sampson in the end zone for the touchdown. Ty Butler's kick cut the Cameron lead to seven points with less than three minutes to play in the first half.

Cameron showed its versatility on offense using the run and the pass. Reyes gained 18 yards on the first play of the drive. Wilcox caught a 34-yard pass from Drake for the touchdown 40 seconds before half time.

The fourteen point advantage was extended to 21 as Cameron took the second half kickoff and marched 72 yards for another score. Kardarius Bradley relieved Reyes as the Yoemen's running back and gained 11 yards on three carries. Drake was four of five passing for 50 yards including the last 11 to Mayer for the touchdown.

Gavin Perry-Koci of the Bobcats returned the subsequent kickoff 82 yards to the Cameron 4. Perry-Koci scored on the next play but the point after was missed leaving Orangefield behind 28-13 with 8:44 to play in the third quarter.

It was more of the same from the Yoemen as they went 66 yards in eleven plays. Bradley got more involved carrying the ball five times for 28 yards. The duo of Drake and Mayer teamed up again for the touchdown this time from 21 yards to make the score 35-13 with just over three minutes left in the third quarter.

Twice the Bobcats moved the ball into Cameron territory. The first drive stalled at the 30 and the second ended when Bobcat quarterback Brayden Parker was intercepted by Wilcox.

The final nail in the Bobcats' coffin was added by Bradley when he found a seam in the Orangefield defense and sprinted through it for a 52-yard touchdown. The Bobcats used trickery again for their closing score as Parker passed about 10 yards to Kane Smith who then lateraled to Dischler who danced the last 36 yards down the right sideline shaking off three attempts to push him out of bounds. 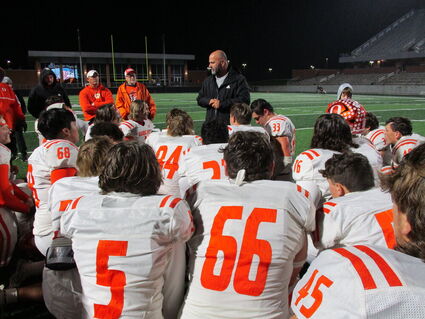 Dischler was the leading rusher in the game with 134 yards on 22 carries. Two of the three Bobcat touchdowns came on passing plays, but Orangefield only completed 3 of 12 passes for 73 yards.

Cameron's Drake completed 19 of his 26 passes for 151 yards with four touchdowns and suffered one interception. Bradley led the Yoemen in rushing with 105 yards on 14 carries including his touchdown.

It was a sad ending to a great season for the Orangefield Bobcats. Coach Smalley responded, "I'm just proud of this group of guys. We had the target put on our backs last February when the UIL dropped us in classification to 3A. The expectations went up and the goal was a district championship, and to these kids' credit they worked hard and earned it so I'm really proud of that. I love these kids, I love their effort, I appreciate them, I appreciate the coaching staff, I'm very proud of them no matter the outcome tonight."