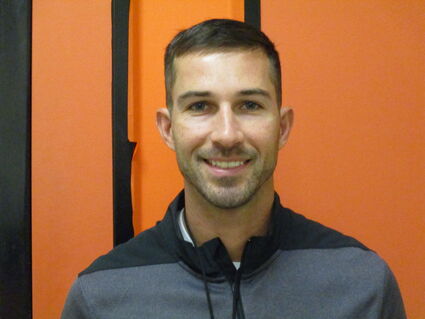 Two important changes in the girls' basketball program at Orangefield go into effect this season. The Lady Bobcats have dropped in classification from 4A to 3A and they have a new head coach.

Eric Girola comes to Orangefield from Buna where he was the Lady Cougars head coach the last 11 years. "When this job at Orangefield came open I decided to try something new, a new place, some new people, and so here I am," Girola replied.

Buna has been an annual opponent for Orangefield in girls' basketball so Girola knows the quality of the program he inherits. Girola elaborated, "I'm very familiar with Orangefield. I've looked at Orangefield as a really good team, and I have always admired the girls' program. I thought they've played really hard, they've been very disciplined, and they've had a great tradition from the Bill Tennison years to the present."

Girola added, "One of the biggest draws for me was knowing I wasn't necessarily having to build a program, but it was just keeping it going. If there are little ways to improve it let's improve what's been built."

Several returning Lady Bobcats will be available for Girola to build his team around this season. Senior Jaylynn Alfaro will be a starting guard for Orangefield. Harleigh Rawls contributed strongly as a junior and is expected to be a major leader now as a senior.

Junior Greenlea Oldham will be a big part of Girola's game plan for the Lady Bobcats. Oldham will be a post and should be the top rebounder for the team. Three other returning juniors Sterling Richard, Brianna Moore, and Kaylea Gravett will see time on the court as guards.

The Lady Bobcats should be especially strong at the guard positions with the four returning girls from last season's squad. "Jaylynn, Sterling, Kaylea, and Brianna I'm really leaning on them to be defensive players. They've kind of already made the comment that's kind of their specialty or what they thrive at doing. Harleigh and Greenlea we'll probably need them to lead us in scoring, but I'm hoping those guards will gain some confidence so they can chip in as well offensively," Girola responded.

Backing up Oldham at the post is junior Ava Dyer. She is about as tall as Oldham which will give Orangefield some height under the basket when either one of the girls play.

The lone freshman is Brooklyn Wagoner on the varsity for the Lady Bobcats. Wagoner will provide more depth to the already quality back court at Orangefield.

There may be some additions to the varsity as the season progresses. Girola explained, "There's a few girls that I'm looking at on the JV squad that hopefully if they can continue to get good minutes on junior varsity and develop I don't see why later on in the season maybe by district play we could pull them up, and they might be of some help for us too on the varsity."

The full varsity roster had only played two games and practiced together about three times by the second week of November. The success of the Orangefield volleyball team kept Kaylea Gravett, Brianna Moore, Harleigh Rawls, and Greenlea Oldham from working out with the other Lady Bobcats until then.

It has been a learning experience for the Lady Bobcats and for Coach Girola. "Everything's new. I know with me being new the kids are learning about me a little bit and I'm getting to learn about them, we're just trying to be patient and know it's going to take a little bit of time for us to kind of jell well and be on the same page," Girola stated.

After coming to Orangefield Coach Girola met with his two assistant coaches Ashlee Peevey and Emmi Michael who have been in Orangefield as players and now as coaches so they knew Girola's predecessor Jennifer Willis. Girola informed, "I didn't want to come in and change a whole lot of stuff if it was working. I really leaned on the assistant coaches asking their opinion because I value their opinion. There's a few little changes and there's a few terminology things that may be a little different. My main concern is our attitude and our effort. If we can handle those two things I think we'll be fine."

The Lady Bobcats lost their first game of the season to the West Orange-Stark Lady Mustangs on a last second shot. Girola indicated, "It was a tough way to lose it, but keeping things in perspective we had only one practice together as a team so I thought overall it was fine."

The second game was against Newton, and Orangefield had a really good second half defensively holding the Lady Eagles to just two points to win the game easily. "I think we kind of wore them out a little bit, and we just locked in a little bit better on defense," Girola recalled.

Prior to the Thanksgiving break the Orangefield Lady Bobcats will have three solid days of practice. Girola believes, "That is what we need because we just haven't had any time together."

In preparation for the start of the district schedule on December 6 the Lady Bobcats played in the Nederland tournament where they got to play five games. The week of the Thanksgiving break Orangefield is scheduled to play two more games.

Coach Girola shared his expectations for the Lady Bobcats this season. "Obviously, we want to make the playoffs every year we want to extend the season, but I want to set the bar even higher. I want us to be district champions and make some runs in the playoffs not just a one and done. We hope to get back to the regional tournament at some point that's always our goal. As a coach my honest professional goal is I want to win a state championship. That's the goal. If we're not working towards that then why are we here," Girola concluded