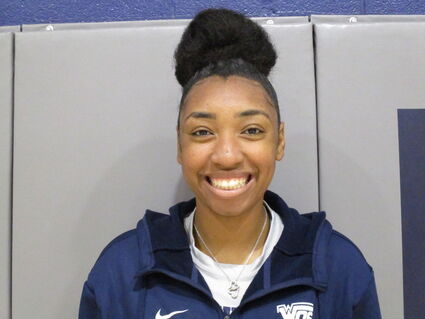 The West Orange-Stark Lady Mustangs basketball team has a new leader in Jaden Spell who is starting her first year as their head coach. Spell was an assistant coach last season and knows the girls she will have playing for her during the current campaign.

The previous year was a difficult one for the Lady Mustangs. "The girls could have done a lot better, it was just one of those years. All five starters for the Lady Mustangs were seniors so we've lost our whole starting lineup which is a big hit for our program," Spell admitted.

No returning starters is the downside but the good news is there are four Lady Mustangs who played on the varsity for West Orange-Stark who are back. Spell added, "We're young but we have a few juniors who are ready to take the reins and show everybody what they've got."

Jordynn Patton has played three years on varsity for the Lady Mustangs. "I'm looking for her to really contribute in big ways not only offensively but defensively as well," Spell replied.

Coach Spell is emphasizing a defensive mentality for the Lady Mustangs. Spell explained, "Our offense is our defense."

At the number two guard position is Nathia Allison who will be counted on to a be a scorer. Spell is looking for Allison to shoot the ball very well this season for the Lady Mustangs.

The fourth Lady Mustang with some varsity experience is Marilynn Guillory who is a transfer from DeRidder, Louisiana. Spell evaluated, "Marilynn is going to be another pivotal part of our offense as well as our defense. I have a solid core of seven but those are the four most important players."

Other young ladies will see playing time this season with the Lady Mustangs basketball team. The fifth starter or regular on the court for West Orange-Stark will be interchangeable between multiple players. "That's the energy spot. My fifth position is just an energy spot. The girls come in, they give their energy, they give what they've got, and then I'll roll in the next person, and I roll out the next person, it's a position I rotate players in to play," Spell described.

Junaiya Winston and Vernicia Collins are seniors who will see considerable playing time for the Lady Mustangs. A sophomore Trinaisja Burnom will be interchangeable with Winston and Collins in that energy spot.

Consistency is the goal early in the season for West Orange-Stark. Coach Spell analyzed, "Through three games we're very iffy, and some days we're on and some days we're off. We're trying to get consistent. It's a work in progressive, but when we are consistent we're unstoppable, hands down. When we're working on all cylinders it's a well-oiled machine."

A good night for the Lady Mustangs was their game with the Lady Bobcats on November 8 at Orangefield. "The Orangefield game was back and forth the whole game. I don't think either team led by more than three points. Our highlighted players in that game were Carlysia Simien with 20 points and Jordynn Patton who had 6 points and she finished the night with 14 rebounds, 3 steals, and I think 3 blocks," Spell recapped. The Lady Mustangs won the close contest.

The first district game for West Orange-Stark will be December 9 against the Little Cypress-Mauriceville Lady Bears. Spell believes the Lady Bears are one of the preseason favorites to win the district along with the Silsbee Lady Tigers.

That said Spell is not counting out her own Lady Mustangs from being a contender. "I feel as though you should always set high goals, regardless if you reach them or not it's still a goal. I don't know any other way to be, so I set high goals. I really think that we could win it. I'm going to put it out there that the Lady Mustangs have the opportunity to win a district championship," Spell concluded.