Adam Conrad IS Buddy the "Elf"

"Elf the Musical" premieres at BCP this weekend 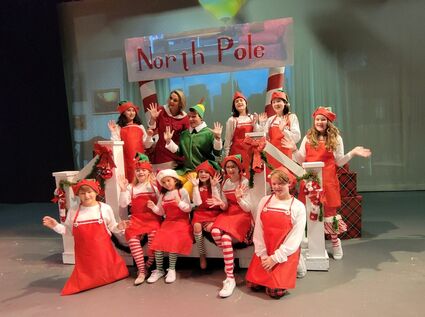 There is not a better role on the planet for Adam Conrad’s return to the live stage after a 12-year hiatus than Buddy in “Elf the Musical.” He is excited to be cast as the lead character in Beaumont Community Player’s newest musical offering that opens this weekend for a three-week run.

Those that know him are familiar with his over-animated antics which are the perfect embodiment of Buddy’s character.

“I’m goofy and I’m crazy and this part is so much energy, so much fun (clears throat) ...and it was in my age range,” said Conrad. “It was one of those that when I listened to the music I said, ‘Oh, I can play that role. I really want to play that role. It kinda felt right.’”

Conrad lives in Bridge City, spent years involved in Orange Community Players, but has been absent from the stage for some time because he has been teaching upcoming thespians on the high school level.

“I haven’t performed in 12 years. My last show was at OCP in 2012, so I was really kind of nervous to do it,” said Conrad. “I’m really happy I did because it gave me a glimpse into what I’ve expected of my students all these years.”

He has enjoyed playing with the kids cast in roles of elves and teenagers in the production, as Buddy has many childlike qualities.

He started teaching in Nederland High School then switched to Vidor High School 10 years ago. As a drama teacher it did not leave much time for him to perform himself. He changed positions at Vidor this year.

“Now I’m a counselor,” said Conrad. Leaving the drama department freed up his nights and weekends where he could return to the stage.

“With the rigorous schedule of directing at school I always had rehearsals after school and contest shows, I never had the time to get to a theater and rehearse without losing my sanity,” said Conrad. After a moment of reflection, “Maybe I did lose my sanity. I don’t know and that’s really why I’m here. Now that I’m a counselor I have more time in the evenings to devote to having fun on this side of things.”

There are several other members of Vidor ISD included in the production cast and crew. The assistant principal at Vidor High School, Bryan Brassard, is the director of the show. This is his eighth musical to direct at BCP. Brassard was brought on as director after “Elf the Musical” was already selected to be part of the current season.

“It has become a show that I think is a great show for the season to get the people in the mood for Christmas. I’m glad I could be part of something BCP is bringing to the community,” said Brassard. “It’s a good show. I actually worked it when it came to the Lutcher and so I was familiar with the show already and John (Manfredi) asked me to do it.”

The role of Santa is being played by Vidor Police Detective Jeff Courts.

“Santa wishes he was Jewish,” said Courts. “That’s actually in one of the songs.” He proceeds to sing the lyrics.

This is not Courts’ first rodeo playing Santa. In the past, he was asked to play Santa in a Port Arthur Little Theatre (PALT) children’s production.

“It was years ago, I don’t even remember the name of the show, but it was a kid’s show and they needed a Santa,” said Courts. “It was about Santa’s workshop at the North Pole was damaged and they had to set up shop in Florida. I didn’t have a real beard back then, it was fake.”

He said auditioning for Elf was a hard decision because he also wanted to be part of the other production running concurrently in the black box theater at BCP, “It’s a Wonderful Life: A 1940s Radio Play.”

“I wanted to audition in this one and Andy’s show and Santa won out.”

Andy Coughlin, director of “It’s a Wonderful Life” walked by in that instant and Courts said, “Sorry Andy.”

To which Coughlin replied, “No problem, I wouldn’t have cast you anyway.” Courts is not the only one with a dry sense of humor roaming the halls of the Betty Greenburg Center.

Courts laughed, “I just wanted to do the Folley artist thing, that is just cool as all get out.” Courts was referring to the sound effects used during radio shows and films.

Santa was not picture ready by press time because his hair appointment, which was made in the middle of the interview, was not until Tuesday at 2 p.m. Patrick Anderson is the “hairdresser extraordinaire” according to Courts. Anderson also plays Walter Hobbs in the show.

Krystal Sanchez, who plays Emily, graduated from Little Cypress-Mauriceville and grew up in Orange. She currently lives in Port Neches with her husband and children.

“I wasn’t going to audition. I was in a show last season, ‘Chitty Chitty Bang Bang.’ I was Truly Scrumptious. I loved it. It was so much fun and I wasn’t going to do this at all,” said Sanchez.

Sanchez says she plans her shows to fit with family and “Elf” was not included in her schedule, but her family had other plans. “Elf” happens to be her husband’s favorite movie and her kids love it too.

“I have four children, so it’s a family decision when I do shows,” said Sanchez. The entire family was urging her to audition. “I don’t know,” she said.

Friends that auditioned for the show joined the family and she finally caved into the pleadings. “I’m so glad I did,” Sanchez said.

Her character, Emily, is Buddy’s stepmom that does not believe in Santa Claus and is very practical.

“She transforms throughout the show,” said Sanchez. “She lightens up a little bit and believes in the magic of Christmas, something she really hasn’t allowed herself to do in her life.”

Is Conrad ready for his return to the stage this weekend?

“I’m scared. I’m hoping by opening night I have all my lines and lyrics memorized,” he said. “I over think it, then I twist all my words around. We’ll see. Our first show is Friday at 7:30.”

“This is a musical that can be enjoyed by all ages,” said Sanchez. “I hope that it ignites some magic of Christmas in people.”

“I think everyone should come out and see the show,” said Conrad. “It’s a fun, festive holiday treat.” 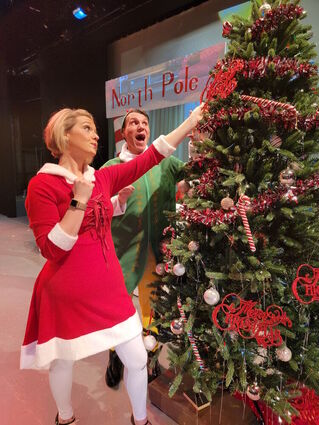 Christina Maldonado (L) and Adam Conrad (R) take the stage this weekend in "Elf the Musical" at Beaumont Community Players' Betty Greenburg Center for the Performing Arts. Conrad plays the lead character of Buddy the elf.

Prices for all individual tickets: Adult - $26; Senior and Student - $24. There is a $3 service charge per ticket.

If “Elf” is not to your taste, “It’s a Wonderful Life: A 1940’s Radio Play” is offered in their Black Box theater for the next two weeks. FYI: It is performed without an intermission.

Tickets to both shows can be purchased online at Beaumont Community Players - Home Page (beaumontstages.com) or through the box office. The Betty Greenburg Center for the Performing Arts is located at 4155 Laurel Ave, Beaumont, TX 77707.