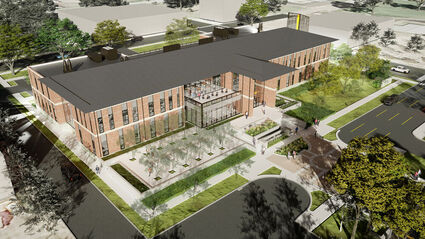 Green Avenue in downtown Orange will have an eye-catching two-story building with a glass tower in front as Lamar State College Orange constructs a new, $38.15 million Academic Building.

The college this week released architectural drawings of the building, which will be along Green between Fifth and Fourth streets where the old glass Orange National Bank, later Capital One, stood for some 40 years.

The Texas Legislature in 2021 approved the money. The legislature was led by Speaker of the House Dade Phelan, who represents Orange County.

Earlier this month, the Texas State University System Board of Regents approved the architectural designs for the 54,900 square foot building. PBK Architects based in Houston designed the building.

Construction is set to begin in March with basic completion scheduled in August 2023.

Both floors feature large student gathering and lobby spaces, as well as men's and women's restrooms. The front lobby space will be viewable via the second floor from an open concept mezzanine. The second floor will open up to an approximately 730 square foot terrace, providing views along Gatemouth Brown plaza. The building will include a glass stair tower visible from both directions of Green Avenue, showcasing how the future of LSCO is bright orange, she said.

The new Academic Building will feature also tie into the Gatemouth Brown Plaza opened last year in honor of the late Grammy-winning musician who grew up in Orange. The plaza ties will tie in pedestrian walkways between the Academic Building and the Ron E. Lewis Library. The walkways include part of what was once Fourth Street. The city of Orange agreed to shut off the street for expansion of the college campus.

The new building would have been only a dream to the Orange citizens who helped start the two-year college more than 50 years ago. The college's first classes in 1969 were held in a vacated elementary school built during World War II in the Riverside housing project for defense workers off Simmons Drive.

LSCO has been under President Dr. Tom Johnson for four years. He has been developing the campus and starting educational programs to help students get industrial jobs and other training for vocations.

The campus offers 30 career-oriented degrees and certificates, along with academic courses that can transfer to a four-year university. Career education includes nursing, dental assisting, industrial technology, and information technology. The educational training will help as industries, especially the petrochemical industry, expand across Southeast Texas and Orange County.

The Texas Legislature approved money to allow Johnson to lower tuition, fees, and books for students enrolling in the college. The reduction has led to increased enrollment.

The expansion of LSCO has not been kept to Orange. The college recently opened a branch in Lumberton as a way to increase higher education in rural areas.