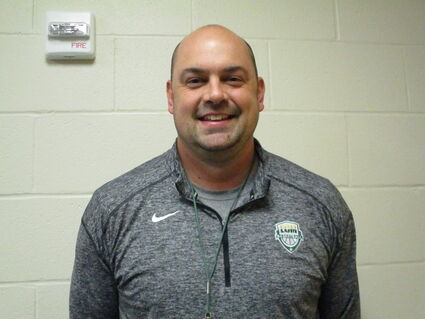 Little Cypress-Mauriceville made the playoffs last year in basketball, and the Bears enjoyed their finest post season run ever. LCM is looking to improve on its district record and at least match its best previous performance in the playoffs this season.

The Bears were a little disappointed by adversity and were unhappy finishing third in their tough district last season. LCM landed in a nice spot though in the playoff bracket which led to victories in the first two rounds of the post season a first for boys basketball at Little Cypress-Mauriceville. The Bears were defeated by a very good Houston Washington team in the third round.

Bears' Coach Brad Jeffcoat is excited about the finish to last season and the prospects for the new campaign. "Jumping forward to this year our goal is to take that a step or two further and get to the regional tournament. Of course we're really happy with last year, but last year is last year and it is time to move on," Jeffcoat responded.

Fortunately, the top four scorers for Little Cypress-Mauriceville are back from last season. Point guard Da'Marion Morris is a four-year starter for the Bears' varsity basketball team. Ben Elliott is also a four-year starter and will probably become the all-time leading scorer for LCM this season.

Junior Alantheon Winn has been a starter since his freshman year but was injured much of that season. Jeffcoat believes Winn may be his most highly recruited college prospect when he graduates in two years.

Another Fuller joins the varsity this season with sophomore Jonah Fuller making the team. Jonah was the best player on the freshman team for Little Cypress-Mauriceville. Jeffcoat expects him to be a difference maker for the varsity. In his first game after the football season Jonah played really well and gave the Bears a spark off the bench according to the coach.

Ty Blackmon spent half of last year on the junior varsity but will be full-time on the varsity in this his senior year. "Ty's a really good defender and a really good shooter, and I think that he is going to give us something that nobody else does," Jeffcoat praised Blackmon.

Jeffcoat described Jayden Benton as the big wildcard for the Bears in the post position. Jeffcoat elaborated, "Jayden's not the biggest guy, he's not the most skilled guy, but he is the hardest playing guy you'll ever see and one of those guys other teams hate but we love that he's on our team."

The new season started for the Little Cypress-Mauriceville Bears with scrimmages against Barbers Hill, New Caney, Port Arthur Memorial, and Sulphur. "The intent of that is to get us ready for district and the playoffs. Those are four really good basketball teams that are all going to have really good seasons, and I thought we competed well with those guys," Jeffcoat explained.

The first actual game was a win for the Bears against the Beaumont Kelly Bulldogs. Jeffcoat recalled, "Pretty big win for us. It was a good chance to get some guys some minutes, look at some new things, and kind of get some information about our team."

Another victory followed as LCM prevailed 59-45 against the Port Neches-Groves Indians on November 15. "That was a good win for us. They're always very well coached, a tough team ,and honestly I think the Indians are a playoff team in 5A," Jeffcoat added.

Alantheon Winn was the high scorer for the Bears with 19 points. Also scoring in double figures were Ben Elliott with 17 and Ty Blackmon tallying 12 points against the Indians.

After a win over Huffman, LCM beat the Buna Cougars 67-43. Winn scored 12 points and pulled down 10 rebounds in the game. Blackmon had 11 points and Noah Fuller tossed in 10 points for the Bears.

Little Cypress-Mauriceville won its fifth straight game to open the season with a 67-49 victory over the Kountze Lions. Winn tallied 21 points and grabbed 11 rebounds. Elliott had 13 points to go with 11 rebounds. Noah Fuller and Blackmon finished in double figures with 13 and 10 points respectfully.

Non-district games and tournaments continue for LCM through December. The first district game for the Bears will be Tuesday, January 3, at the Dr. Pauline Colburn Hargrove Gymnasium against the Bridge City Cardinals.

Coach Jeffcoat was asked for his expectations on the district race for the Bears in the always tough District 19-4A and the possibility of them advancing in the playoffs again. "I'm going to dodge your question. The expectation for us is to come out everyday and play harder than the opponent. We've emphasized being physical, we've emphasized being tough, and I think if we bring that everyday we're going to be really successful. You look at our district, obviously, Silsbee is the top dog and they've been there for a while. I think they're ranked number two in the state. We get to play those guys twice, and that's an opportunity we embrace, that's an opportunity we look forward to. Fortunately and unfortunately we're in Region III of Class 4A so we have the Houston schools, the Waco schools, Jacksonville's really good in our region. It's 'murderers row' and there's no easy outs so at this point we're taking it day by day. We're going to get better every day and hopefully come late February early March we are where we want to be and in a position to get to that regional tournament," Jeffcoat concluded.