Bobcats expected to be strong in basketball 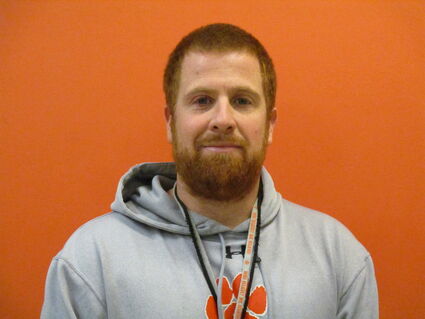 There are three reasons the Orangefield Bobcats should be outstanding in basketball this season. The first is the Bobcats return eight players from last year's team, second the junior varsity should supply several new players to the varsity for this campaign, and finally Orangefield moved to the lower 3A classification making it one of the largest schools in its district.

The Bobcat varsity was 25-11 last season finishing in second place in their district behind only the state ranked Silsbee Tigers, and the Orangefield junior varsity was the co-district champions for underclassmen. Orangefield was lowered to Class 3A by the University Interscholastic League for at least the next two seasons.

Coach Jake McDonald of Orangefield is happy with the progress of the basketball program. "Last year as a whole was a really good year for Bobcat basketball. Since last March we started playing in the spring and the summer and then obviously in our fall league. Our scrimmages and non-district schedule hopefully sets us up or gears us up to make a run and to compete to win some of the big games against the top schools and hopefully we can make another run deep into the playoffs, that's the plan," McDonald expressed.

The Bobcats returning to the varsity this season include four starters from last year. Guard Pete Ragusa was first team all-district as was Zane Wrinkle at guard. Inside Morgan Sampson and Koen Maddox are both really good post players who were all-district for Orangefield.

Other lettermen include Kane Smith, Brayden Parker, and Cameron Dischler. Leyton Loft and Brady Anderson were brought up to the varsity for the Bobcats' playoff game last season. McDonald analyzed, "We've got a lot coming back. On paper this should be a good team. I've never had a team with this much experience or depth. We've got ten to twelve guys I think that are good varsity basketball players."

There are experienced Bobcats at every position. "We've got a mix with really good guards. We've got some post guys that have been really good. We've got some athletic kids coming from football that are really good defensively and can get after it. In summary this team has a chance to be one of the best teams to come through Orangefield and if things go our way it would be great to make a run in the post season," McDonald forecasted.

The successful football season at Orangefield delayed the inclusion of several Bobcats back on the basketball court. Kane Smith, Leyton Loft, Brayden Parker, Cameron Dischler, Kyle Michael, Morgan Sampson, and Koen Maddox were all football players who have only rejoined the basketball team after the Bobcats were eliminated from the state playoffs in the Area Round the third week in November.

The depth of the Bobcat basketball program carried them through the early games until the football players joined team. Griffin Thomas a freshman did a good job stepping in and filling a void until the football season concluded. Another freshman Jaden Scales in particular contributed in that interim. Scales has been on the varsity from the very beginning of the season and is expected to stay up. McDonald described Scales, "He's a really good offensive player. He's going to be a key player for us even with the football players joining the team now."

Other Bobcats playing roles on the varsity have been Kadyn Rucker, Kale Washington, Garrett Rawls, and Scotty Szakmeister who helped Orangefield win 73-59 in the season opener on November 12 at Onalaska. Pete Ragusa was the leading scorer with 26 followed by Zane Wrinkle with 19 and Jaden Scales had 15 points. "We had three guys who had really good games. Ragusa, Wrinkle, Scales were all fantastic and Brady Anderson was too," McDonald replied.

Orangefield next defeated the Vidor Pirates 59-50 at the Orangefield gymnasium on November 15. Ragusa topped the Bobcats with 26 points adding 5 assists and 4 rebounds. Scales tallied 17 points, Anderson totaled 7 points with 7 rebounds, and Wrinkle led Orangefield with 10 rebounds.

The week of Thanksgiving the Bobcats played the Liberty Panthers and won handily 81-35 at home. Three Bobcats scored in double figures Ragusa had 23, Scales added 17, and Kane Smith tallied 11 points. The leading rebounders were Ragusa, Wrinkle, and Kyle Michael each with 5 boards. Ragusa also dished out 5 assists in the game.

Four Bobcats scored in double figures on the Saturday after Thanksgiving in Orangefield's 87-36 win over West Orange-Stark. Ragusa was tops with 24, Leyton Loft totaled 16, Anderson made four threes for his 12 points including three straight shots in the third quarter, and Wrinkle scored 11 points.

The Orangefield Bobcats actually play their first district game on Tuesday, December 13, at Orangefield against Buna. The district schedule then resumes Tuesday, January 3, at Hardin.

Entering this season the prognosticators picked Orangefield in the top 25 teams for Class 3A in Texas. "In theory all this is on paper which is really cool, but it does put a target on our back. We have to make sure we bring our best effort every single night," McDonald responded.

Expectations are obviously high for Orangefield, and Coach McDonald shared what he is expecting from the Bobcats. McDonald promised, "I think this year fighting for a district championship should be something that we're shooting for and hopefully compete for a chance to reach the regional tournament and hopefully even an opportunity to reach the final four in San Antonio. A lot of things have to go our way. We have to keep improving all year."

McDonald admitted dropping down to Class 3A has landed Orangefield playing some very tough teams in its new district. "Where we are right now is not what we can be in January because this district we're moving into is one of the best 3A districts in the state. East Chambers is fantastic, Kountze is fantastic, Buna's fantastic, Anahuac's been really good lately, Warren is a program on the rise. There's no break in competition just because we're dropping down from 4A to 3A," McDonald concluded.