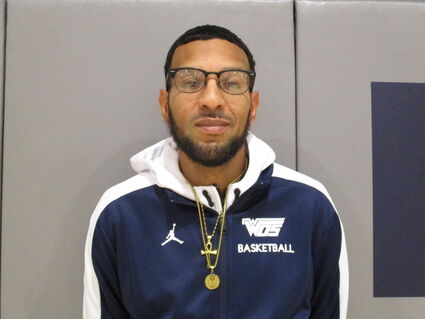 This could be a rebuilding year for the West Orange-Stark Mustangs basketball team. Only one Mustang is back on the varsity that won a playoff game last season.

West Orange-Stark was up and down most of Coach Chris Castille's first year leading the Mustangs. They struggled early before finding their groove near the end of the district games and making the playoffs. The Mustangs pulled off a bit of an upset winning a playoff game for the first time in four years defeating the always tough Hardin-Jefferson Hawks in the opening round of the post season. Another big upset came up short by four points when WOS fell to Houston Yates in the second round.

Coach Castille evaluated his initial season with West Orange-Stark going into this his second year with the Mustangs. "It was a pretty good season. We're going to be young. We've only got one returner from last year, but we've got a good group of juniors and sophomores that are going to carry the load for us," Castille reminded.

The lone returning Mustang Darren Anderson saw a load of playing time on the court for West Orange-Stark and is one of the team's best defenders. Anderson is going to be the team captain of the Mustangs. Castille responded, "He's going to be the head of the snake on our defense. Everything goes with our defense. So, we're going to be pressing and trapping. Darren will be very vocal letting everybody know where they need to go."

Another Mustang who at least saw some action on the varsity last season was Jailen Brown. Castille believes Brown will see significantly more time on the court this year. Brown's assignment will be to guard the best player on the other team each night according to Castille. His duty is straight defense and to be a lockdown defender. "We're looking at him as a Patrick Beverley type of player," Castille described.

A lot is expected of junior Ja'vaugnte Richard as the starting point guard. Richard will be counted on to provide much of the scoring load for the Mustangs.

Junior Andrew Cooper will back up Richard at point guard. The two of them will be good point producers for West Orange-Stark.

Sophomores will see plenty of playing time with so few senior and junior Mustangs on the varsity. Two sophomores in particular Jamar O'Neal and Jamikael Davis are talented on the scoring end. Castille predicted, "One of them might end up being the all-time leading scorer for West Orange-Stark by the time they graduate."

A freshman Geramicah Davis is Jamikael's younger brother. Castille is grooming Geramicah to be another scorer like his brother.

The Mustangs split two of their opening games of the season. Hamshire-Fannett a top 25 team in the state defeated West Orange-Stark in the first game. The Mustangs beat the Legacy Warriors in the second contest 65-44 to even their record. Ja'vaugnte Richard had the hot hand shooting the basketball and scored 22 points. Captain Darren Anderson led by his actions hitting for 20 points in the impressive win.

Over the Thanksgiving break the Mustangs played at Orangefield. Darren Anderson was sick and was unable to play in the game. His absence was significant especially on defense for WOS as the Bobcats poured in 87 points. Chadrick Lee was the high scorer for the Mustangs with 9 points. Richard tallied 8 points in the game.

As the season was starting the coach expressed his excitement about the prospects for the West Orange-Stark Mustangs. "I'm really excited about this season. I feel like we've got a good core group that can play and be very good at defense by pressing. I want to see if we're going to share the ball on offense more. I'm really going to look at the early games to see how we adjust and we do especially against strong teams like Hamshire-Fannett. They gave us a lot to see and what we need to work on," Castille commented.

An intangible goal Coach Castille wants to achieve for the Mustangs is togetherness. Castille explained, "We're trying to build our brotherhood and our team spirit together before district comes so we can get it rolling. It took a little longer last year, so I'm hoping to build on that earlier this year because district starts December 16. We start out with Vidor."

West Orange-Stark plays in a very competitive district, but that does not deter Castille from believing the Mustangs could win the district championship. "The goal is to be on the top of the district, we're going to try to win it. We know Silsbee and LCM are going to be tough tasks, but our goal is to win at the end of the day," Castille concluded.