Church wants to donate building to county, but parking lot holds up deal 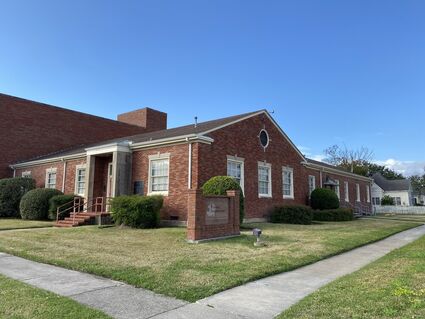 This is 702 Elm Avenue. First United Methodist Church wants to donate the building to the county. It will be used for emergencies to house first responders and volunteers.

First United Methodist Church wants to give Orange County a downtown building that can be used to house first responders and volunteers during an emergency like a hurricane. But an impasse on an agreement for use of a parking lot across the street is holding up the deal.

Tuesday, Orange County Commissioners Court tabled accepting the building at 702 Elm Avenue until a parking agreement can be worked out with the Stark Foundation.

Precinct 1 Commissioner Johnny Trahan presided over the meeting in the absence of County Judge John Gothia. He said Gothia was adamant about getting the parking agreement with the foundation.

Assistant County Attorney Denise Gremillion said the Methodist church will allow the county to use its parking lot nearby. However, the county has reached an impasse with the foundation.

"The insurance demands cannot be legally met by the county. There are legal things the county cannot do," she told commissioners.

Commissioners at the previous meeting had tabled the donation and the foundation agreement. After learning about the parking lot impasse, they agreed to take no action. They then tabled accepting the deed from the church.

The building to be donated is a one-story red brick building at the northwest corner of Sixth Street and Elm Avenue. It had once been part of the old Southwestern Bell building. The church acquired it decades ago and has used it as a spiritual enrichment center.

During the citizens comments part of the meeting, Anne Edwards, who lives at the end of Burton Road, asked the county's help to solve an on-going problem with the man who owns property next door.

She said her father bought her land in 1976, and she and her husband moved there in 2004. The next year they acquired the property. In 2006, a man who bought adjacent property tore down their fence and cut down pine trees. She said the man told them he was going to build a nice house. They did not object.

However, when they were out of town, they came back to find the county had put in a 35-foot culvert on their land to help the neighbor. Then instead of building a house, the adjacent property owner put in an RV park. The park has all kinds of traffic including dump trucks and school buses. Edwards and her husband filed a lawsuit in 2007.

However, recently, the other man removed their cattle guard and took out their surveyed markers. The man has also run a tractor on their land.

"This man feels like he owns my property," she said.

She told commissioners that when she tried to contact the other property owner, he responded that she needs to work with the county.

Assistant County Attorney Gremillion said she went to look at the Edwards' land and is reviewing the old lawsuit. Also, County Engineer Corey said he has also talked with the Edwards and is going back to look at old records. "We're looking at it. We don't have a resolution," he told commissioners.

Edwards thanked Gremillion and Oldbury for their efforts.

Commissioners Court is not allowed to act or respond to comments about subjects not on the agenda.

In other business, the court approved Precinct 4 Constable Matt Ortego to buy a duty Taser 7 with 30 cartridges for $3,688. The money is coming from his budget.

The court also agreed to put a down payment of $11,900 to replace damaged glass doors at the Expo Center on FM 1442. Precinct 4 Commissioner Robert Viator said the payment is to order the specialty glass for the door.