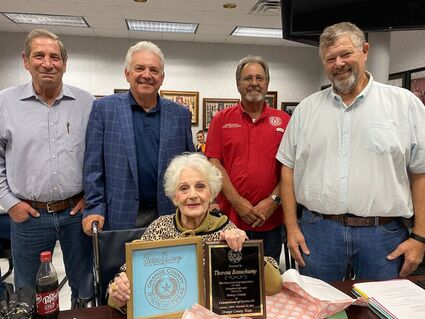 Theresa Beauchamp poses with other members of Orange County Commissioners Court as she was honored for serving as Precinct 2 commissioner. She is retiring when her term ends December 31.

Theresa Beauchamp poses with other members of Orange County Commissioners Court as she was honored for serving as Precinct 2 commissioner. She is retiring when her term ends December 31.

Theresa Adams Beauchamp has spent the past four years walking along rural roads and stomping through ditches. But she's ending her term as Orange County Precinct 2 Commissioner in a wheelchair.

Instead of sitting up with the rest of the court, she sat in the wheelchair at a staff table.

On December 7, she fell and fractured a hip. Her first few weeks of retirement will be spent in physical therapy and rehab, she said.

Orange County Commissioners Court honored Beauchamp with a plaque and reception. She plans to attend her last meeting on December 27.

Beauchamp served one term as Precinct 2 commissioner, a seat her mother, Marcelle Adams, held in the 1980s. Adams was the first woman to serve as an Orange County commissioner. They made the first mother-daughter team to serve on the court. Marcelle Adams turned 99 earlier this year.

In the past 150 years, the county has had a couple of fathers and sons serving at different times.

Commissioners Court wasn't the first elected office for Beauchamp. She served ten years on the Orange City Council, where she learned that if you want to win public office, you have to knock on a lot of doors to talk to people.

Her motto as an elected official has been "Work Hard, Be Nice." With her soft Texas drawl and Ann Richards hair, it's hard to imagine her not being nice, even to an irate taxpayer with a drainage problem.

When she was in the hospital last week after the hip injury, a doctor told her she sure was strong. She replied about all the walking and ditch work. The medical crew was puzzled. Then she revealed she is a county commissioner. However, she couldn't fix their problems in another county.

Beauchamp is a native of Orange and has long roots through her father, the late Albert "Cowboy" Adams. She married a fellow Stark High graduate, Frank Beauchamp and moved away for some years, before coming back.

She served many years as an educator, including times with the Bridge City ISD and the West Orange-Cove CISD. She served on the Orange City Council while working with WO-C.

In 2018, she filed to run for county commissioner against an incumbent. She won the nomination by two votes, with the margin determined after a recount. No one ran against her in the general election. 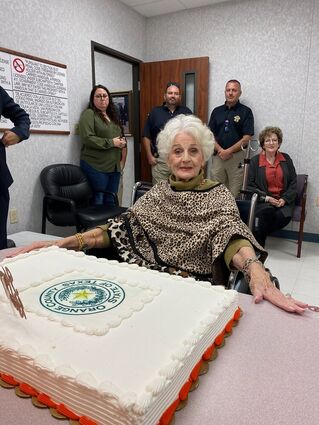 Precinct 1 Commissioner Johnny Trahan said he will not be at the December 27 meeting; so he had to tell her goodbye publicly this week. He poked fun at her taking so long to write out in cursive 'Theresa Adams Beauchamp' on documents. His gift was a framed blow-up of her signature on a legal document.

Beauchamp has one son and three granddaughters who live in the Houston area. After her hip heals, she plans to spend more time with them and get to see their plays and performances. She even has an apartment at their house, except it's upstairs. An incentive for rehab.

Otherwise, she hopes to continue her "fun" activities like working with the garden club and playing bridge. That's a card game. Not part of the Road and Bridge Department. After all, she won't have to stomp through ditches any longer.