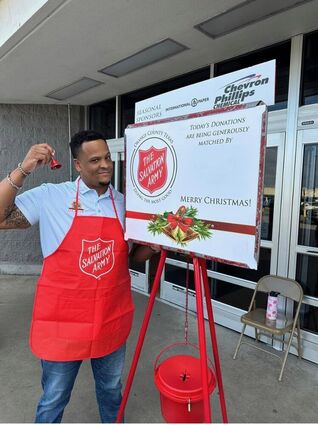 The competition was fierce this past Friday between football coaches, mayors, chemical plants, and captains. They rang bells for the Orange County Salvation Army's first Red Kettle Ring-Off.

"Who won overall? The people of Orange County," said Captain Jan Zuniga. The Red Kettle Ring-Off raised $6,969.40 in four hours as the four competition groups stood outside doors at the West Orange Wal-Mart. That will all be used locally to help people throughout the year.

The fourth competition was between the two Salvation Army captains for Orange County, Frankie and Jan Zuniga. Two years ago, they had a friendly competition with Captain Jan coming out ahead and Captain Frankie getting a pie in his face.

Totals for the other competitions were not listed.

It all was in fun for a good cause. LC-M even had the high school cheerleaders show up to cheer each donation. And as a bonus, the coach had his football players choose 17 Salvation Army angels to fulfill wishes. The angels are cards filled out for what kids want for Christmas. Most of the nearly 400 had been filled, and some of the ones left are now filled thanks to the football players.

Captain Jan said everyone had so much fun ringing and competing that they have already signed up to do the competition again next year.

In announcing the winners, Captain Jan pointed out that Dow had the heaviest kettle of the day with 50 pounds of change. And even though it all adds up, Chevron came out ahead.

The Ring-Off was only part of a community wide effort to help stock the shelves and coffers of the local Salvation Army. The donations help carry the Army through the year. And even though they weren't part of the competition, WO-C Superintendent Dr. Rickie Harris and his wife manned a kettle on Saturday. 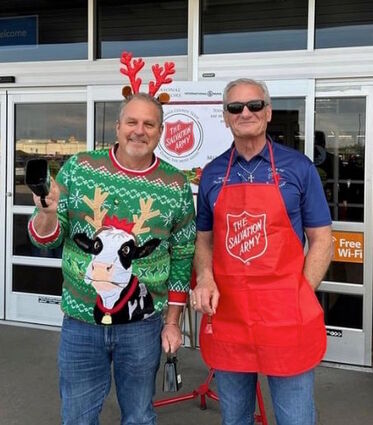 The annual Granger Chevrolet-KOGT.com food drive, also last week, collected hundreds of pounds of non-perishable foods that will be shared between the Salvation Army and Orange Christian Services. West Orange-Stark Elementary School won the special cup for bringing in the most food.

Orange City Councilor Paul Burch, who is also a member of the local Salvation Army advisory board, announced the pantry still needs more food. So he and his husband, Raul, are opening their elaborately decorated house in the Old Orange District this Friday, December 16, from 5 to 8 p.m. The house was the site of the Service League Toy Coffee last year. The address is 703 Eighth Street.

The couple is asking all visitors to bring non-perishable food as a donation to the Salvation Army.

Christmas food donations help keep the local Army's food pantries stocked until spring. Captain Jan has reported that the economy with inflation has brought more people seeking food and less food to give out.