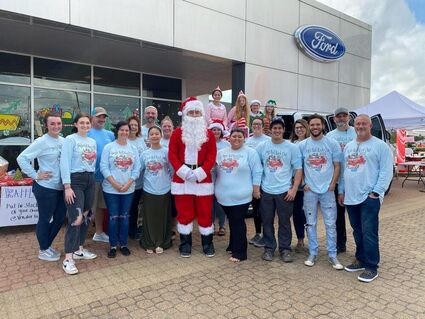 Santy Roberts, owner of Roberts Ford on Green Avenue, wanted to help for the Christmas season this year and decided to have a festival dubbed Jingle Bell Rock Out. She didn't realize the Saturday event marked her first anniversary of assuming the dealership.

"It's the holiday season and we wanted to get the community together," she said.

It was also a time for the community to meet the Roberts "family" at the dealership, the employees who help keep it running.

Will Palasota, general manager of the dealership, said everyone at the business loved the idea and got involved. They solicited vendors with all sorts of handmade goods, treats like kettle corn, and food trucks. The "charge" for a booth at the Jingle Bell Rock Out was a new toy.

Music played as people wandered the lot looking at booths. People from the community also brought toys and the event filled a big Ford truck with gifts that will go to local charities helping families in need. This year, the toys are appreciated even more because donations are down and requests are up because of inflation.

"We hope we can bring some smiles to their faces," Roberts said about the toys.

The Jingle Bell Rock Out brought a lot of smiles to the children attending. "Look, I made a snowball," one boy proudly told his parents at the "snow" machine. Santa and his elves also made an appearance.

Roberts is a veteran of the used car business and acquired the dealership that has been at Green and 16th Street since the 1960s. "I see a lot of potential in Orange County," she said.

The new owner took over at one of the strangest periods of the business. After the Covid 19 pandemic shut down the world in 2020, car parts and new cars were not made. A shortage of new cars made used vehicles even more valuable. Palasota said prices on a used pickup truck could fluctuate $10,000 in days.

Roberts Ford has managed to keep a large inventory of used cars and the new ones are coming in steadily now. "Last week, we had 24 new cars come in," he said. "There's still a shortage, but it's not as bad as it was." 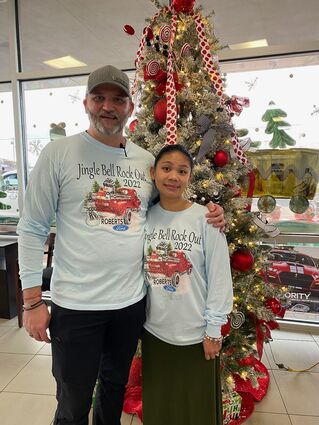 Palasota pointed out a large blue pickup truck in the showroom. He said they wanted to advertise a lifetime supply of gasoline with the purchase. Then he grins. The truck is electric.

He said the dealership is operating with the concept of serving the local community and region. People do not need to go to Beaumont or Louisiana to shop for vehicles and good deals, he said. The dealership also has a full service center and a quick service center.

Business has been good at the business the past 12 months. "We are getting focused on growing and serving," Palasota said.

Roberts said she enjoys being in Orange she wants to meet more people. And expect more events this upcoming year. Plus, expect the Jingle Bell Rock Out to be back next year.

"We're hoping as time goes, it will grow more and more," she said.