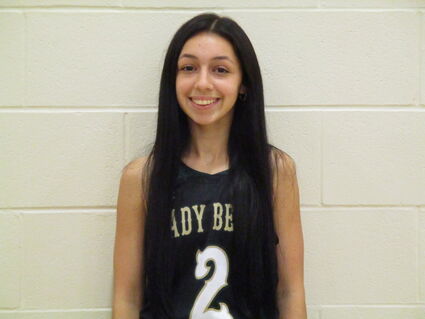 The district opener on December 9 for the Little Cypress-Mauriceville Lady Bears and the West Orange-Stark Lady Mustangs was an exciting battle that went down to the final seconds. The Lady Bears made a late rally to pull out a 44-40 win at the Dr. Pauline Colburn Hargrove Gymnasium on the LCM campus.

Lady Mustang Marilynn Guillory scored the opening bucket to give West Orange-Stark the initial lead. The Lady Bears tied the game before Nathia Allison scored to give the Lady Mustangs another two-point advantage. It would be the last lead for WOS until the final 100 seconds of the game.

Little Cypress-Mauriceville led 8-4 after one quarter with four different Lady Bears chipping in with two points each. The second quarter belonged to Lady Bear sophomore Keylie Washburn with seven points to give her nine by half time.

The Lady Mustangs stayed close with their three go to girls Guillory and Carlysia Simien each scoring a bucket and Jordynn Patton sinking two field goals in the period. At the half the score was 17-12 in favor of LCM.

In the third stanza the Lady Bears got a little more breathing room. Coming off the bench Kenniya Champine scored four points. Starters Eden Frenzel and Washburn both tossed in two buckets as Little Cypress-Mauriceville went to the final quarter ahead 30-23.

As the fourth quarter started the Lady Bears pulled further ahead taking an eight-point lead before the Lady Mustangs started a comeback getting to within a point when Simien sank two free throws to make the score 33-32. LCM's Annabelle Fisher answered with a three-point play and then another free throw to put the Lady Bears back up by five points.

The Lady Mustangs galloped to the next eight points when Guillory put two rebounds back in the goal sandwiched around two buckets by Simien to give WOS a 40-37 advantage. Less than a minute remained in the game.

It was time for the Lady Bears to call on their two biggest stars. Fisher sank two clutch free throws to narrow the deficit to one point with just 33 seconds remaining to be played in regulation.

A turnover by the Lady Mustangs gave the ball to LCM for an inbound play in front of the WOS bench. Washburn made a long pass that Fisher ran down and then drove to the hoop for a layup to put the Lady Bears back in the lead 41-40 with only 15 second left.

Washburn closed out the scoring. She made a free throw and then had a put back basket just before the buzzer to make the final margin of victory four points for the Lady Bears.

LCM Coach Eddie Michalko was pleased with the success of Washburn and Fisher working the inbound pass for the go-ahead basket for the Lady Bears. "We have an out-of-bounds play we actually run. I was thrilled we actually ran it the way it's supposed to be run. Annabelle broke out, she was open, and she was able to finish," Michalko recalled.

Despite the loss Coach Jaden Spell of the Lady Mustangs was pleased with their superlative effort in the contest. "Our goal tonight was honestly just to work as hard as we absolutely could, to play with everything we had, and give it everything we had. All in that's the motto this year, all in. The Lady Mustangs gave everything they had tonight, it's just a tough loss," Spell concluded.

The leading scorer for the Lady Bears was Washburn with 16 points. Fisher scored 9 points eight coming in the dramatic final period. Champine also had 9 points.

Guillory of the Lady Mustangs matched Washburn also scoring 16 points. Simien was in double figures with 11 points. Patton added 6 points and Vernicia Collins came off the bench to score five points for WOS in the second half.

The West Orange-Stark Lady Mustangs resumed district play on Tuesday, December 13, against the Bridge Lady Cardinals. Their next district game will be at home this Friday against the Vidor Lady Pirates.

The Little Cypress-Mauriceville Lady Bears traveled to Silsbee to play the Lady Tigers on Tuesday. Their next district game will be Tuesday, January 3, at Bridge City. 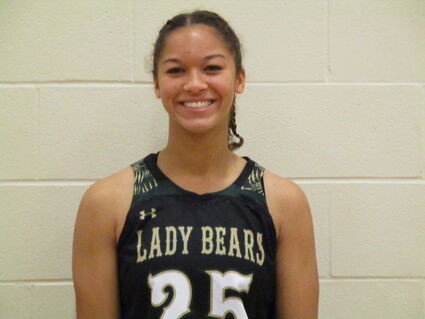 The Bridge City Lady Cardinals opened district at home on Friday, December 9, against the Jasper Lady Bulldogs. The Lady Cardinals came out ice cold failing to score in the first quarter and trailing 5-0 after the opening period.

The second quarter saw a change in momentum with the Lady Cardinals outscoring the Lady Bulldogs fifteen to eleven to trail by only one point 16-15 at the half. Jasper took control of the game in the third quarter and then pulled away in the fourth quarter winning 52-30 in the end.

Bridge City played at West Orange-Stark this past Tuesday. The Lady Cardinals next game will be Friday, December 16, on the road against the Silsbee Lady Tigers.