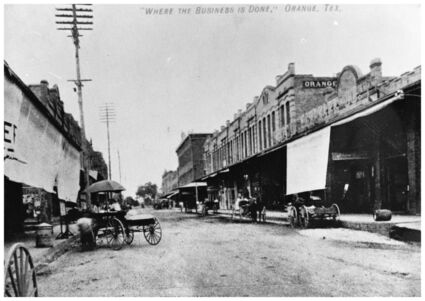 Stores in downtown Orange were full of "fine" and "elegant" food and wares one hundred and twenty years ago as the city drew shoppers from all over the county.

Luckily, a Christmas Eve tragedy was averted thanks to H.F. Frazee and other "gentlemen." They grabbed the bridle of a horse that had gone wild, saving the two young Depew ladies who were in their buggy on Fifth Street.

The evening Orange Daily Tribune reported the "Exciting Runaway" that morning at Ortmeyers Furniture. The two daughters of S.M. Depew were driving in a buggy when their horse became frightened and started to run. The sister at the reins gained control, but the horse starting kicking "furiously" and ran onto the sidewalk at the Rein and Telephone Building.

Though Frazee and others got the bridle, the horse went through the large plate glass window of the store, "smashing the window all to pieces and breaking several handsome toilet sets that were on display in the window."

The sisters had no injuries "except for a terrible fright," the newspaper reported. The buggy had not turned over, even though the curb to the sidewalk was a foot above the street level. Ortmeyer's had a total damage of about $40 for the window and the broken toilet sets.

Despite the excitement the day before Christmas, people carried on with their celebrations.

It was a year worth celebrating. The grand Holland Hotel had opened on at Fifth and Division at a cost of about $140,000.

The school superintendent met with leaders at the Orange Rice Mill and reported classes were increasing. More room was needed. A $23,000 bond issue could provide more space. The newspaper bragged that any school-age child living within the city limits could get nine months of education free.

The Orange Progressive League of business leaders reported a site had been selected for a huge cotton mill. The League was trying to gather $3,700 to give to the company as a bonus to come here. Also, a man from Michigan had been in town searching sites and gathering samples to see about getting another new paper mill here.

The future shows, though, the cotton mill never came and it took more than 60 years to get another paper mill.

Stores heavily advertised their goods in the daily advertisements in the newspaper, which offered home or business delivery six days a week for 50 cents a month.

Gate City Drug Store sold "fine candies in fancy boxes" plus "fine cigars in Xmas packages." Only 25 cents for those fine cigars. You could also buy an "elegant line of perfume."

The Orange National Bank touted a barrel-shaped bank for children so they could save a barrel full of money by the next Christmas.

Griggs Stationery in the Link Building on Fifth had more than paper and pens. They sold toys, dolls, and fireworks.

Fireworks were popular at many places. Bland's Bakery and Confections had fruitcakes, cakes, pies, rolls, and bread for those who didn't want to make theirs at home. They also had Gunther's and Lowney's candies at prices from three pounds for 25 cents up to $1 a pound. You could get fruit, nuts, cigars, and tobacco there. Plus they had "a big stock of fireworks." George W. Bland was proprietor.

The Orange Gun Club, all men of course, met at Sabine Supply in downtown on December 23 and decided to have a trap shoot on Christmas Day at Bland's pasture. The location must have been well-known because Orange and Orange County had a lot of Blands. Sabine Supply advertised fine guns and the best ammunition.

McLean & Curry, touted as "The Fancy Grocers," had "sweets for the sweet" with the largest selection of boxed candy in town. They had crystalized frits, chocolates, bonbons, coconut chews, and "something new," Mexican pecan candy. The store was carrying a "Bon Voyage" trunk. A small trunk with lock and key "full of extra fine cakes which make an elegant present for children."

Pond Brothers and Company had groceries and its own "Orange Brand" of coffee, which they roasted and ground for customers.

Orange Furniture in the Link Building had book cases, tables, and sideboards, advertising "nothing is more acceptable to the lady of the house than an elegant sideboard."

Graves and Forsyth, "The Busy Big Store," sold clothing and had a pre-Christmas close-out on caps. They had 65 fur-trimmed caps at clearance for 25 cents. A child's Eiderdown cloak could be purchased at prices from 35 cents to $1.35.

Other businesses in town included Wing Lee's oyster parlor on Front Street, where a person could board upstairs for $18 for 30 days.

Eastin & Stark Livery Stable was on Fourth Street. The Central Fish Market, with Collins and Morrison as proprietors, sold fish, game, and oysters. They also paid cash for hides, fur, and "all kinds of game."

Link and Rein Land Co. thought people should get "something substantial for Christmas." Put a down payment on land in town and you could soon have a house.

J.W. Link was the land developer and a lumber mill owner. He built the finest mansion on Green Avenue and served as mayor. However, somehow he lost interest in Orange and moved to Houston. There he developed the Montrose area and built a mansion similar to his one in Orange.