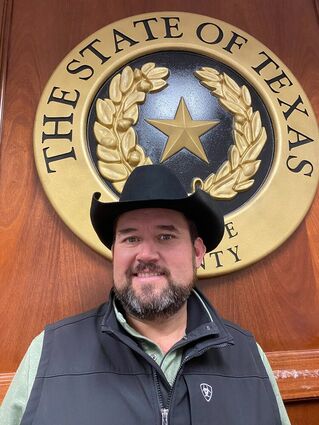 Anyone living in Mauriceville for the past few years has run into Chris Sowell. He's worked with youth sports leagues, 4-H, and is president of the Mauriceville Heritage Association. He's delivered meals to shut-ins. He's shown up with a chainsaw to cut storm debris.

"I found a passion for helping my community," he said.

He's assisted so many people that they kept asking him to run for county commissioner. This year was right, especially when the incumbent Precinct 2 Commissioner Theresa Adams Beauchamp decided to retire.

He was told that with five people in the Republican primary and no incumbent, there would be a runoff. He surprised everyone. No runoff was needed. He got 60 percent of the votes with the other four candidates splitting the remaining 40 percent.

"That is unheard of," said his friend and businessman, J.W. Dalton. He said the results were not a surprise to the people who know and work with Sowell. "He is a salt-of-the earth guy. If he give you his word, it's as good as a contract. Chris is just the true meaning of a good man."

His work in the community drew the admiration of former Precinct 2 Commissioner Owen Burton and his wife, Nelda. They endorsed Sowell and praised him for his volunteer work.

Sowell is a widower who has been raising his two children since his wive, Christi, died in 2020 in a car accident. Son Kolbie is 18 and at Alvin Community College studying and playing baseball. Daughter Kyleigh, age 14, is in the eighth grade at Mauriceville Middle School. His bonus daughter, Presley Parra, is also 14 and a freshman at LC-M. She's part of his life now because he has a relationship with her mother, Mindy Nance.

Sowell is 46 years old and has lived in Mauriceville for 40 years. His ties to the town are deeper. His grandmother is from Mauriceville.

Sowell said he was born in San Augustine and he moved to Orange County with his parents, Ralph and Ann Sowell, when he was 6 years old. He said his father worked in a shipyard and the family lived in the Cove neighborhood of Orange a year before moving to Mauriceville. HIs parents are now deceased. He lost his father in 2012 and his mother in 2016. Then the death of his wife came in 2020. He quietly says he's hoping not to lose someone dear in 2024.

He went to Mauriceville schools and graduated from Little Cypress-Mauriceville High School in 1994. "I went straight to work," he said. He was a welder for a while before deciding to switch. He worked as an industrial firefighting company until Hurricane Rita. Then he went to work for Mueller Inc., which manufactures steel buildings. "I've been in the steel building business since," he said.

Currently, he's working for Schulte in outside sales, but he'll give notice soon. He takes the oath of office on January 1 at 1 p.m. in the 128th District Courtroom. He hopes his 86-year-old grandmother, Carol Morgan, of Mauriceville can attend the ceremony.

He said it's also a good time to be a county commissioner. The county is seeing lots of growth and he likes the other members of Commissioners Court. "Everybody's goal is to better the county," he said.

The county will be continuing to grow, especially with the announcement of the new Chevron-Phillips-Qatar Entergy chemical plant as a sure thing. The county is also hoping to land an Enterprise LNG plant on the Neches River side.

Mauriceville is growing, too. More houses are coming in and new businesses are opening. Sowell pointed out the new hardware store that opened this year plus the new Market Basket grocery store constructed after the old one flooded. O'Reilly's Auto Store is coming and he's heard about plans for a Dollar Tree. And the established businesses are thriving, he added.

Precinct 2 covers a wide swath of the county, including all of Mauriceville and Pinehurst, plus part of Orange and "a small piece of Vidor."

Sowell has been out the past few months studying his new territory and getting ready to help with the roads and drainage, the main concerns of people. He's also been working with incumbent Beauchamp. "She's been very helpful," he said.

However, he still hasn't gotten a key to his new office to help Beauchamp move. She fell and broke a hip two weeks ago and is now in a wheelchair.

One of the major drainage problems in Mauriceville and his part of Vidor is a railroad bridge that blocks water. He hopes to work out a solution for that. Sowell said the county's new engineer, Corey Oldbury, has done a good job reorganizing and working on the roads.

On Tuesday, he was talking about the upcoming freeze and taking hay to his cattle. But don't call him a rancher. That word, he said, describes Wayne Peveto and Dan Harris. "I have some cattle," he said.

Later, he jokes, that he's "just a red neck." But not any more. Come January 1, he'll be an Orange County Commissioner.