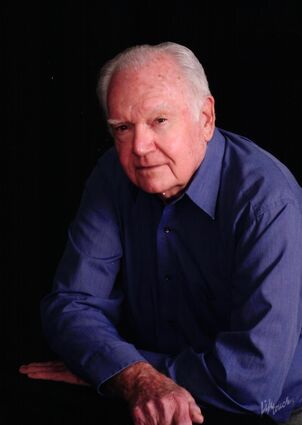 Cecil C. “Sparky” Sparks, Sr., 93, of Orange, Texas, passed away on December 15, 2022, in Orange. Funeral services will be held at 1:30 p.m., Wednesday, December 21, 2022, at Claybar Funeral Home in Orange. Officiating will be Dr. Larry Haynes and Deacon Steven Obernuefemann. Burial will follow at Autumn Oaks Memorial Park in Orange. Visitation will take place prior to the service from 12:30 to 1:30 p.m., Wednesday, at Claybar Funeral Home in Orange. Born in Flora, Louisiana on July 25, 1929, he was the son of William A. and Ocie (Key) Sparks. Cecil C. “Sparky” Sparks, Sr. grew up in Provencal, La., where he graduated from high school. Upon graduation, he joined the U.S. Navy and headed to San Diego, Ca., where he served as the ship’s cook. From that time on, his family was blessed with his amazing cooking skills, often requesting his brisket and potato salad. Soon after his return from San Diego, he was called to Orange to work for DuPont. While at DuPont, he met Barbara Murray, who would later become his first wife and the mother of Cecil Jr., his only child. Sparky continued on at DuPont for 33 years, where he retired as a production foreman.  In 1976, he met and married Mary Hudler, and became stepfather to her three children– Raymond, Karen, and JoBeth. When telling his friends about Mary, he would say, “Wait until you meet her - she looks just like Barbara Stanwyck!” Sparky and Mary enjoyed retirement and went on many adventures - both near and far - with close friends and family. However, they were never too busy to babysit, and were always ready with Pawpaw’s card games, a trip around the yard on the riding lawn mower, and Mawmaw Mary’s homemade pizza. Pawpaw was known for his teasing ways and mischievous giggle. He routinely agitated the teachers in his family, threatening to call Austin and request that the school year be extended. Reminiscing on his own school days, he shared stories of the time he spent in the “pig pen”-- a corner of his elementary room which was reserved for students who came to school with dirty fingernails. He never quite understood why a local weatherman so regularly gave incorrect weather forecasts. His favorite snacks were hogshead cheese (don’t ask!), and cracklings. He preferred to wash those down with Red Rose’ wine - “the cheap kind”. He would stay up way past his 8:00 bedtime if the Dallas Cowboys or the Houston Astros were playing. One of Pawpaw’s main loves in his life was his neighbors from South Dana. They gave him friendship, love, and care for many years, and they brought him joy whenever he spent time with them. Over the last two years, he was blessed to have some of the most loving and capable ladies as his caregivers. No words can express how much we appreciate the many ways they cared for Pawpaw. Jennifer Rinehart, Diana Palmer, Carol Wolfe, Dorothy Bean, Michelle Armentrout, Mary Doucet, and Tracy Medina were truly a blessing to our family. He was preceded in death by his wife, Mary Sparks; parents, William and Ocie Sparks; and siblings, James Sparks and Vera Rogers. He is survived by his sons, Cecil “Sparky” Sparks Jr. and wife, Becky, and Raymond Hudler and wife, Carolyn; daughters, Karen Gafford and husband, Jimmy, and JoBeth Stafford and husband, Kenny; grandchildren, Kristen Sparks, Brandon Sparks, Casey Sparks and wife, Alex, Stacey Savino, Melissa Gouthier and husband, Brandon, Kim Hudler, Aimee Loker and husband, Drew, Jade Stafford, Justin Stafford, Sheila Hilburn, Dana Stark and husband, Gary, and Traci Tucker and husband, Artie; his 12 great-grandchildren; 3 great-great-grandchildren; and his other loving family and friends. Serving as pallbearers will be Brandon Sparks, Casey Sparks, Glenn Hanson, Jimmy Gafford, Kenny Stafford, and Kevin Mead. Honorary pallbearer will be Raymond Hudler.