Santa is full of surprises 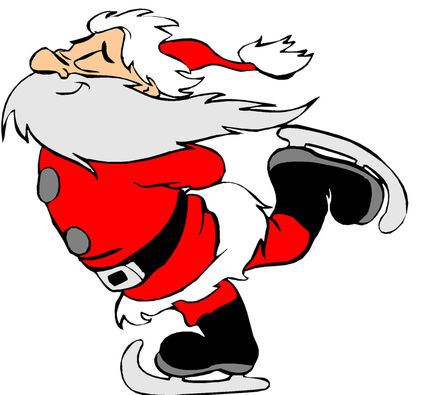 After sitting around the house for nearly five hours Saturday without any heat or electricity, I decided to hike around the corner to where the transformer was being worked on.

There were a couple of curious onlookers also at the site-- one being an old man with a white beard and the other being a gal who had been jogging and was taking a break.

After Entergy told us the problem would be taken care of between noon and 12:30 p.m. and then revised to between 2:00-2:30, I went back home just as the power was restored.

It took the cable about 10 minutes to restore its power and then I got to see the final half-hour of the Jackson State-North Carolina Central match-up in the Celebration Bowl where Head Coach Deion (Prime Time) Sanders’ team lost its first game of the season 41-34 in overtime after posting a 12-0 regular-season record.

Early Sunday morning wife Susan informed me that we were again without power and that the temperature in the house was 63 degrees. Again, we lit the fireplace and eventually got the temperature up to 66.

Our neighbor informed us the power would be restored between 2-2:30 p.m. after being told noon. Again, I jaunted to the work site and once again I saw that same old man pacing back and forth.

I told him that the power should be restored between 2-2:30 p.m. and he snapped “No way, Sonny.” Now, I haven’t been called Sonny in more than 70 years.

` “You must be a retired Gulf States Utilities worker to be so concerned about this outage,” I said. “No Sonny, I just want the problem to be solved and it’s not going to happen until around sunset,” he replied.

“I know everything, he said without blinking an eye.

“You must be a relative of my old boss,” I said jokingly.

He just turned around and walked away, walked slowly about 10 feet away and dropped something from his coat pocket.

I rushed to pick it up and return it to him. By the time I looked up, he was long gone. He either ran the 100-yard dash in under seven seconds or just disappeared into thin air.

The old man was right, the power wasn’t restored until almost 5 p.m. When I returned home, I took a peek of his rumpled sheets of paper. It contained the following gifts for various people from Santa:

ENTERGY—The 3-F Award. There are thousands of Frustrated Football Fans in the Orange area who suffered through Saturday and Sunday’s lengthy power outages, unable to watch a total of 17 games (10 bowl games and 7 NFL contests) shown on TV. Don’t be surprised if we get hit with another rate increase to help pay for the workers’ overtime hours.

TEXAS A&M HEAD COACH JIMBO FISHER—A Five-Blade Electric Fan to help him fade the heat put on him by the wealthy alums, chancellors and most fans for the Aggies not even being eligible for the lowest bowl game available, And, he led the nation in recruiting this year.

NEW LAMAR CARDINALS HEAD FOOTBALL COACH PETER ROSSOMANDO—A pair of fancy Cowboy boots and a 10-gallon hat so he will at least look like a Texan, even though he was born on Long Island, N.Y.

LOS ANGELES RAMS—Penthouse To Outhouse Award for winning the Super Bowl in February and sitting in last place in the NFC West Division today with most of the same players.

NEW YORK YANKEES—The Gift of Hope that 2022 MVP Aaron Judge will play as well making millions of dollars as he did on his rookie contract. For an incentive, the Yankees named him team captain, the first player to receive that honor since Hall of Famer Derek Jeter wore the “C”.

WEST ORANGE-COVE SUPERINTENDENT RICKIE HARRIS—A Huge Eraser. One can ‘cook the books” on most directives handed down from Austin, but there’s no way to expunge that 5-6 football record you’re responsible for.

GRANDSON LT. LOGAN SMITH—An engraved signature from Tommy John himself for needing a second surgery on his right arm that he is recuperating from today.

LA RAMS QUARTERBACK BAKER MAYFIELD—A copy of the book “How To Get Along With My Teammates in the Locker Room”. It may help him stay with this team longer than the others.

OCCASIONAL BRIDGE PARTNER SUSAN PENNINGTON—A Gold Embossed Thank You Card for letting your busy schedule still allow me to play bridge with you.

DALLAS COWBOYS—A 2023 Schedule that doesn’t involve the NFL’s weakest division—the AFC South—after the Cowboys had to rally to beat the one-win Houston Texans last week and then managed to lose 40-34 in overtime Sunday to Jacksonville—the only team the Texans were able to beat this season.

HELEN EDWARDS—A “We Miss You Miss Helen” Sign that describes the feelings of all your Kroger customers.

COLLEGE FOOTBALL FANS—Weaker Bowl Games due to the new Transfer Portal that allows a college football player to switch schools without penalty. Those who want out after this season won’t want to risk getting hurt in a meaningless bowl game and opt not to play for his old school which weakens the team. This will become more prevalent between now and Jan. 2.

NEW COLORADO HEAD FOOTBALL COACH DEION (PRIME-TIME) SANDERS—A Brand-New Flavor—the taste of defeat—occurred Saturday when undefeated Jackson State lost to North Carolina Central in overtime 41-34. Those fans who didn’t see the game missed one of the most exciting finishes ever. His only setback this season will indoctrinate Coach Prime to losing when he starts working in the Rockies.

SUNSET GROVE GOLFER CRAIG COUVILLION—A Barometer to mount on your golf cart to display fair weather so your occasional partner knows if it’s too hot, too cold, too windy or too muddy to play a round of golf with you.

INDIANAPOLIS COLTS—The Great Choke Award because the Colts led the Minnesota Vikings 33-0 at the half but somehow managed to lose 39-36 in overtime. It was the biggest comeback in NFL history and the Cinderella Vikings pulled it off and won the NFC North Division in the process.

KANSAS CITY CHIEFS TIGHT END TRAVIS KELCE—A Trophy with just a pair of hands on it after becoming only the fifth tight end in NFL history to eclipse 10,000 career yards

ORANGE BRIDGE CLUB DIRECTOR ED RASMUSSEN—An AttaBoy Badge for being such as loyal and competent director of the local bridge program on Tuesdays and Fridays.

TCU QUARTERBACK MAX DUGGAN—The book “What it Takes to Remain a Texan”—a Houston Texan, that is—after announcing last weekend that he will declare for the 2023 NFL draft in April. The Texans are in desperate need of a quarterback not afraid to run with the football and can throw on the run real accurately and are a shoo-in to “earn” the No. pick of the entire draft for their lousy 2022 season.

And a VERY MERRY CHRISTMAS to my e-mail readers Dick and Gail Kazmar, Bobbie, Dick and Joe Wechter, Don and Linda Bivens, Karen and Brian Smith, Lt. Logan Smith, Earl Thomas, Brock and Glenna Bult, R.C. Slocum, Paul Groncki, Jim Rodda, Bobbie Earle, Wayne and Kaye Morris and for anyone I may have missed, especially you, my loyal readers who have been with Kaz’s Korner since its inception Sept. 12, 1966.