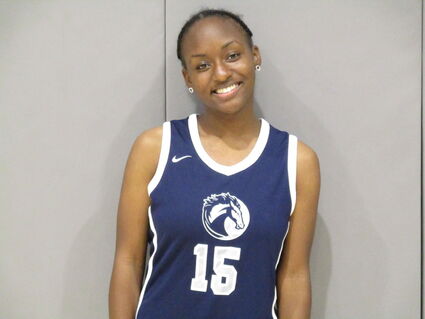 A somewhat slow start for the Lady Mustangs found them down 5-3 in the opening minutes of the game. Forward Marilynn Guillory worked to put the Lady Mustangs on top converting a three-point play and two more consecutive baskets after which West Orange-Stark would never trail again.

The Lady Pirates did cut the lead to one point 12-11 on a field goal by Reagan Stephenson but Guillory then went on a run scoring the next seven straight points giving her 14 for the opening eight minutes. Venicia Collins chipped in with a free throw to make the score 20-11 at the end of the first quarter.

In the second period Vidor was able to trim a few points off the WOS lead. The Lady Mustangs were guilty of several turnovers and were held to just eight points in the second quarter less than half of what they scored in every other quarter. They went to the locker room up 28-21 at the half.

Scoring the first five points to start the second half got the momentum going again for West Orange-Stark. Six different Lady Mustangs scored at least two points in the third quarter led by Collins with four to increase the WOS advantage to ten points 44-34.

The depth for West Orange-Stark was apparent as Junaiya Winston tallied six points and Nathia Allison tossed in five points in the final quarter. The Lady Mustangs closed out the game matching their first quarter point total scoring twenty to outdistance the Lady Pirates.

Guillory the leading scorer in district for WOS had her best game yet totaling 25 points. Winston was in double figures too with 10 points. Balance scoring was evident with Jordynn Patton tallying 9 and Allison finishing with 8 to lead four other teammates that also got in the scorebook.

The victory was a team effort for the Lady Mustangs. Coach Jaden Spell of West Orange-Stark explained, "We worked really hard on defense today to limit the Lady Pirates to less than two shots so that allowed us to really push the ball and get down the court. We're back and fully functional with our whole lineup now available."

The opening basket of the game was by Jordynn Patton to give WOS the initial lead. The Lady Cardinals tied the game with a basket by Morgan Louvier. Marilynn Guillory put the Lady Mustangs back in the lead with her first basket of the evening.

Nathia Allison crinkled the cords with a three-pointer, the first of six threes by the Lady Mustangs, to put them up 7-3 about midway through the first quarter. Guillory added two more buckets including a put back of a rebound to make the score 11-6 after one quarter.

Trinaisja Burnom drilled a three to put the Lady Mustangs back on top. The two teams exchanged the next four baskets keeping West Orange-Stark ahead 18-16 in the closing minutes before halftime.

The Lady Cardinals' Julia Johnson tied the game with a field goal and JoLee McGuire put Bridge City ahead by two with seconds left before the half. With just five seconds on the clock Vernicia Collins put up a long shot that found nothing but net and gave the Lady Mustangs a 21-20 lead at the end of two quarters.

Patton started the third quarter just as she did the first quarter with the opening basket of the half. Guillory and Collins each scored to expand the Lady Mustangs' lead to seven points.

Kaylee Britten stopped the WOS streak hitting the only three-pointer of the game for Bridge City. Burnom and Allison both answered for the Lady Mustangs though with their second threes apiece to make the score 33-23 midway through the third quarter.

Louvier made a pair of field goals for the Lady Cardinals which were offset by the inside duo of Guillory and Patton for the Lady Mustangs each scoring a basket. West Orange-Stark went to the final quarter enjoying a ten-point lead 36-26 after outscoring Bridge City 15-6 in the third period.

Twice in the fourth quarter the Lady Cardinals cut the lead to six points on baskets by Whitney Cunningham and Nicole Sasser. In the end Guillory tacked on three late field goals to regain the double digit lead and ensure the 49-38 victory for the Lady Mustangs.

The high scorer in the game was Guillory with 14 points. Patton was right behind her notching 12 points. Allison totaled 9 points on three threes. Louvier led the Lady Cardinals with 12 points followed by Cunningham who had 9 points.

Coach Spell of the Lady Mustangs analyzed the difference for her girls in this win compared to the opening district loss to the Little Cypress-Mauriceville Lady Bears. "We did all the little things correctly. We boxed out, we rebounded, we protected the ball a little bit more, we made layups when we're suppose to make layups, 50-50 balls were ours, so it was definitely our night," Spell concluded.

Next up for West Orange-Stark will be Buna in a non-district game and then playing in the Buna Tournament on December 29-31. The Lady Mustangs resume district action against the Lady Raiders in Lumberton on Tuesday, January 3.

The Bridge City Lady Cardinals (0-3) have had a difficult start to their district schedule. Prior to their loss to the West Orange-Stark Lady Mustangs the Lady Cardinals fell 52-30 to the Jasper Lady Bulldogs. Last Friday, December 16, Bridge City was crushed by the Silsbee Lady Tigers 82-22 in Silsbee. 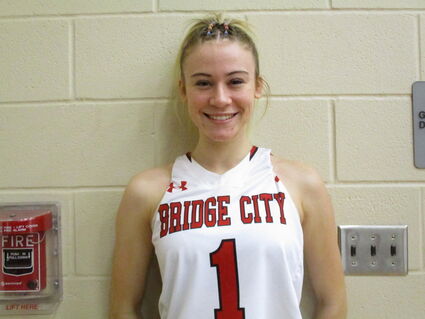 Like the Lady Mustangs the Lady Cardinals will participate in the Buna Tournament the Thursday through Saturday before the New Year starts. Bridge City plays its next district game is against the Little Cypress-Mauriceville Lady Bears at the Bridge City High School gym on Tuesday, January 3.

The LCM Lady Bears (1-1) have played just one other district game since their opening district win December 9 at home against the Lady Mustangs. The Lady Tigers defeated the Lady Bears 72-46 on December 13 in Silsbee. LCM lost a non-district game to Hardin-Jefferson 84-39 on Friday, December 16.

The Lady Bears will participate in the East Chambers Tournament on December 27 through December 29 in Winnie. After the game with Bridge City on January 3 Little Cypress-Mauriceville will return home to play the Vidor Lady Pirates on Friday, January 6 in another district game.