Walker Britten is Rotary Student of the Month 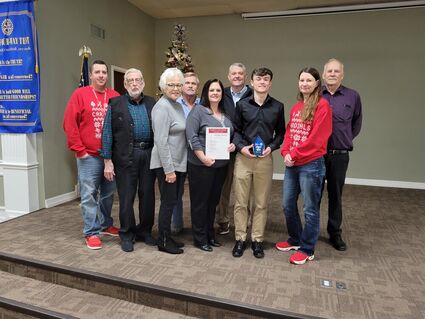 Walker Britten, third from the right, was honored by the Bridge City/Orangefield Rotary Club as their Student of the Month for December

Bridge City Cardinal basketball player Walker Britten was named by the Bridge City/Orangefield Rotary Club as their Student of the Month. Britten was honored at the Rotary meeting on Thursday, December 15.

Britten is a senior at Bridge City High School. He is the captain of the Cardinals' basketball team and their leading scorer in this his fourth year on the varsity team.

Walker's coach Randall Robertson said Britten is the consummate student athlete. "He has an exceptional work ethic both academically and athletically. I am confident Walker will continue to be a leader of society and be successful in whatever endeavors he chooses to pursue post high school," praised Robertson. This was one of several comments from teachers who have had Walker as a student.

In addition to performing his shooting wizardry on the basketball court Walker has been an outstanding student in the classroom. Britten has a 4.60 grade point average and is ranked eighteenth which is in the top ten percent of his class.

Basketball is just one of Britten's extracurricular activities at Bridge City High School. Walker has played the last two years on the school's tennis team, is an escort for the Strutters Drill Team, and has been a member of the National Honor Society since 2021.

Walker is also active in his community. He attends First Baptist Church of Orange and has participated in trash and litter clean-up campaigns in Bridge City and in Orange.

Future plans for Britten are to attend college majoring in general business. Walker hopes to play college basketball as well. He has received and accepted scholarship offers from eight universities in Texas for his academics.

Thank you for always covering BC students and their achievements.