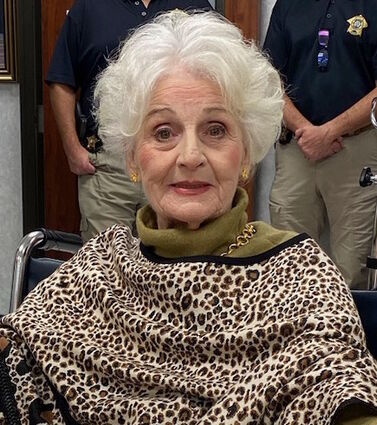 Orange County Commissioners Court ended 2022 with a meeting that was short in length and sweet on compliments.

Precinct 2 Commissioner Theresa Adams Beauchamp was able to attend her last meeting before her term expires on Saturday at midnight. Her husband drove her to the administration building and she used a walker to slowly make it down the long hallway to the commissioners meeting room.

Two weeks earlier, she had been in a wheelchair after falling and breaking a hip. She said the walker is good progress.

County Judge John Gothia joked that he had not expected to see her and he delayed a South Texas hunting trip to make sure the court would have a quorum for the meeting because Precinct 1 Commissioner Johnny Trahan had scheduled to be out of town. The court has five members and needs at least three to conduct business.

Adams drew more praise for her work on the court. "People really don't know what you give when you do this job," Judge Gothia said. "You've done a good job."

The county is celebrating a new $8.5 billion Chevron Phillips-QatarEnergy chemical plant coming, Gothia told Beauchamp she was "a big part of this" as the county negotiated tax abatement terms to seal the agreement with the corporation.

Commissioners took no action on an agreement to renew the "Slice of Orange" app program for smart computer devices. The app is a way for local entities to publicize events and notices. Judge Gothia said the county budgeted for $4,999 this year to continue the app. He said it is used a lot by the Greater Orange Area Chamber of Commerce and the county uses it to put out emergency notices.

"It's another way to let citizens know what's going on," including emergency notifications, Judge Gothia said.

However, commissioners wanted to know more information about how many people are using it. Precinct 4 Commissioner Robert Viator, who represents the Vidor area, said he doesn't know if many people use it.

Precinct 3 Commissioner Kirk Roccaforte said even though the app doesn't cost much, the county shouldn't waste money if something is not used.

The court will have a representative of the app company attend and give statistics on how many people are using the app and whether it is worth the expense.

Buying bonds to cover several officials was part of the agenda. The bonds are a type of insurance for public officials and their actions. The court recently hired Michelle Carroll as the new purchasing agent for the county and set a bond to be set at $5,000.

For the elected officials coming into new terms, the court agreed to a $3,000 bond for Judge Gothia and County Court-at-Law Judge Mandy White-Rogers. Courtroom judges in Orange County, which include White-Rogers, also carry separate insurance policies and do not need a large bond.

The bonds for County Clerk Brandy Roberts and District Clerk Anne Reed were set for $100,000 each, while the bond for County Treasurer Kristy Khoury was agreed at $250,000.

Bonds for the four justices of the peace will be $3,000 each. They are Hershel Stagner Jr., Precinct 1; Chad Jenkins, Precint 2; Joy Dubose-Simonton, Precinct 3;  and Rodney Price, Precinct 4.

In other business, the court approved the direct deposit of $599,184.59 for the sales tax payment covering the month of October.

The county ended the month with pledge security collateral of a total $43.24 million. Of that, $26.57 million is at Wells Fargo Bank and $16.6 million is at First Financial Bank.