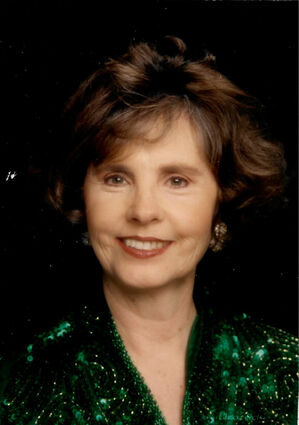 Born in “Fergie Hill” outside of Hemphill, Texas, on December 3, 1943, Eva was the daughter of Willie Samuel Ferguson and Nettie Irene Rogers Ferguson. As the second oldest of 9 children, she was like a parent to her youngest siblings. Passionate about education, Eva was single-minded in her pursuit of the highest grades possible and her goal to attend nursing school in Beaumont. Her hard work paid off, and Eva graduated Valedictorian of her high school and her college where she co-edited the yearbook and developed lifelong friendships.

Eva met her first husband, Earl Gordy, in Beaumont while students at Lamar. She followed his dreams to Alaska where she worked as a registered nurse, accumulating many adventurous stories including helping Eskimo women deliver their babies. Although she loved Alaska very much, she deeply missed her east Texas roots. With her growing family, they returned to Texas where her husband found work as a CPA with the Rogers Brothers in Beaumont. After purchasing property in the community of Rosevine, they began their dream of building a log cabin guided by the Foxfire series and inspired by Henry David Thoreau. Eva continued her work as an RN in Nacogdoches while raising her family and living a wonderful life off the land until Earl’s early death due to cancer.

Her second husband, Donald, entered her life in a Cessna 182 Skylane and quite literally swept her off her feet. Having known each other’s families through the church of Christ, he began picking her up for dates from the Pineland airport and courting her throughout southeast Texas. After a move to Orangefield, a new life of travel and adventures would begin. From flying over the football field during kickoff to flying to vacation destinations, Eva’s new life was full of opportunity and promise. She continued her work as an RN and remained deeply involved in church and her children’s lives. As a parent - and especially as a grandparent - Eva was always the adult who played on the floor with the children, chased them around the house, made big messes in the kitchen, hid in the closet with them, and showered them with love and laughter. For one grandchild in particular, “Gramma Day” was the highlight of the week where he loved to get “lost’ in the sheets while “helping” to make the beds.

Eva was cherished by all who knew her for her kindness, her faithfulness, her intelligence, her silliness, and her love of serving others. She leaves behind an adoring husband and a doting family of children, grandchildren, and many nieces & nephews whom she loved like her own. Although Alzheimer’s ravaged her bright mind, she still found ways to acknowledge their presence as they whispered words of love, stroked her hair, and held her hand during her final days.

Eva was preceded in death by parents, Willie and Nettie Ferguson; her brothers, Glenn Ferguson and Ronnie Ferguson; her sisters, Lorraine Waetjen and Kathy Chance; and her first husband, Earl H. Gordy.

Johnny Ferguson, and Bertz Ferguson; and numerous other loving friends and family.

Funeral services will be 3:00 p.m., Friday, January 6, 2022, at Claybar Funeral Home in Orange, Texas. Officiating will be Evangelist Larry Tomlin of West Orange Church of Christ in Orange, Texas.