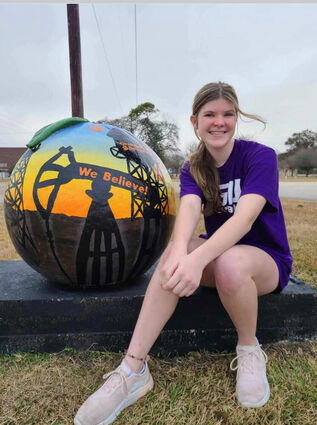 Orangefield High student Kaitlyn Jenkins spent part of her holiday painting the decorative concrete orange outside the Bridge City Chamber of Commerce. The oranges are part of a countywide effort to create distinctive images representing the county namesake.

Nominations for Bridge City Citizen of the Year and Business of the Year will be accepted through the Chamber of Commerce until Friday, January 6.

Chamber Director Mandy Lyda said nominations may be emailed to her at [email protected] Nominations should include the name of the person, or business, and why they should be honored. Written submissions on paper may be made at the chamber office, 150 West Roundbunch Road, during regular business hours. The chamber is open Mondays through Thursdays from 8 a.m. to 3 p.m., and on Fridays from 8 a.m. to 12 p.m.

The Citizen of the Year and Business of the Year will be announced at the chamber's annual banquet, which will be January 23 at 6 p.m. at the Bridge City Community Center.

Melissa Isaacs of the Bridge City-Orangefield Ministerial Alliance was named Citizen of the Year last year with the Sabine Neches Region taking the honors as Business of the Year.

Scott Shaffer is the current president of the chamber and will be handing over his gavel to in-coming president Wanda McGraw during the banquet.