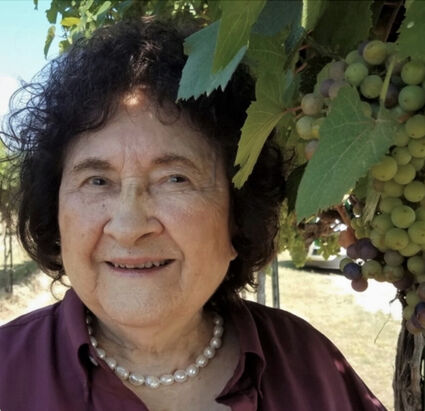 On Thursday, December 22nd, Juanita Cortines Timberlake, age 95, passed away peacefully in her sleep. She was a devout Catholic praying daily, especially the rosary and her collection of crosses was proudly displayed in her room.

Juanita was always welcoming and her smile and giggle were contagious.

A seventy-one-year resident of Orange, at age 90, it would be three major Hurricanes (Rita 2005, Ike 2008, and Harvey 2017) that would necessitate a move closer to family members in Central Texas. With great sadness, in September of 2017 she left her home on 16th street and moved to The Clairmont Retirement Facility in Austin for four and a half years before spending the last six months at Celeste Care Assisted Living in Horseshoe Bay, Texas.

While working in Orange, she met Charles LeRoy Timberlake, another telegrapher-clerk at the SPRR - who worked at the Echo office located near Little Cypress. She and Charles would marry March 11, 1951 at St. Mary’s in Orange. They had three children – Marie, Patty, and Charles, Jr. – and worked hard to ensure that each of them graduated from college, and even flight school. Morse Code would be used at work as well as at home between them for 31 years. It was their special way of communicating secretly! Charles worked for the Southern Pacific Railroad for 35 years when he suddenly passed away in April of 1982. Juanita remained a widow for over 40 years. Juanita was born on June 24th, 1927, the fourth of six children, to Tony and Nettie Gonzales Cortines on the family’s farm in Nacogdoches, Texas.

She is a seventh generation Texan, whose ancestors arrived as soldiers and family of the Spanish Crown on May 1st, 1718 to guard San Antonio de Valero Mission (the Alamo) - and who would later rebuild and resettle Nacogdoches in 1779 including building the Old Stone Fort. During WWII, with two older brothers serving, and feeling the need to assist her family, Juanita, at the age of 16 left home to attend a trade school in Ft. Worth. Upon completion, she became a telegrapher-clerk for the Southern Pacific Railroad on August 24th, 1944.

She worked in several East Texas towns –Livingston, Houston, Cleveland, Corrigan, Woodville, Tenaha, and Liberty before being recommended to take over a primary position in Orange. In August of 1946, Juanita became the telegrapher-clerk as well as the Orange Ticket Agent for all trains passing through Orange. She used Morse Code daily in receiving and sending train orders – and in addition – sold tickets to ride the passenger trains from Orange to any of a number of destinations - Los Angeles/San Francisco, Chicago, New Orleans, Wilmington, or New York. Travel on passenger trains and use of freight trains for transport kept Orange, Texas bustling. Juanita assisted all; several which would contribute to the development and history of the city.

From Lutcher Stark’s Bengal Guard and Drum and Bugle Corp, Edgar Brown’s Livingston shipbuilding, Dupont Executives requiring entire sleeper cars, to the U.S. Naval Base transferring servicemen and families to Orange. Most memorable was Nelda Stark’s remark to Juanita, “the Depot is the Gateway to Orange!” By 1974 train travel had diminished. There were only 2 passenger trains that would pass through, but no longer stop in Orange. In 1975, the Orange Depot would close for good! Juanita and other staff moved to a trailer along the West Orange track siding – where she worked until her retirement in August 1989, after 45 years. The railroad was Juanita’s passion. She treasured her work and what she did until her dying day. A (black and white) painting of the Orange Depot with an old Steam train rolling in on the tracks hung across from her bed. All that visited heard about her experiences!

Over the years - Juanita was disheartened to watch the landmark Depot, where she had worked for 29 unforgettable years, deteriorate into history. Decades (1975-2013) passed before prayers for the Depot to be restored were answered. Juanita joined the “Friends of the Depot” to assist in its restoration. Later, while taking a tour of the building under renovation – she would surprise the architects with her knowledge of the historical design and usage of the building.  Juanita would write a letter to the Union Pacific Railroad (which the SPRR had merged with) asking to help sponsor the renovation of the Depot, which they did.

When the Grand Reopening occurred in 2018, Juanita returned to Orange to celebrate. It brought her great joy to see the Depot completely restored to its original beauty! She was truly overwhelmed and honored - to see the desk where she sat for almost 3 decades – sitting at her station - with a nameplate bearing her name.

Following retirement, Juanita remained in Orange staying active in the community and in Church. She had joined the Catholic Daughter’s at St. Mary’s in 1946, Serving in multiple positions on the Board over the years, she was proud to be a part of this charitable and wonderful group of ladies. She also was a part of St. Mary’s Altar Society. Through her children’s early years she had been involved in Boy Scouts, Little League and Camp Fire Girls.

In other capacities – she served in the soup kitchen at St. Mary’s Church, led prayer groups, and visited the local Nursing Home twice a month – serving them Communion and bringing resident’s fruit. She was also extremely active in all the Church’s Senior activities and with friends.

She was constantly on the road to see children and five grandchildren in Katy and Plano! She attended sports and school events cheering on all their accomplishments. In addition, Juanita was fortunate to travel to many Worldwide locations: to Israel and the Holy Land -to London and Sheffield, England - a Caribbean cruise - to Beijing, China where she walked on two different sections of the Great Wall - and rode the high-speed bullet train to and from Tianjin. She also traveled to Canada to see Niagara Falls!

As a special gift for her 90th birthday - she travelled to Rome, Italy to see the Pope in St. Peter’s Square - and to Florence Italy to see where her husband had served in WWII – and finally on to Paris, France enjoying champagne as many sang Happy Birthday to her at the top of the Eiffel Tower!

For her final overseas trip at age 93 – she would fly to Honolulu Hawaii – to enjoy a beachside view – and experience all of the wonderful sites and events of the Tropical Paradise!

She was a fabulous cook! Homemade biscuits or cornbread made daily! She loved her bread and required it at every meal! Sweets though, were her specialty – cakes: German Chocolate or Carrot, pies: lemon meringue, chocolate, apple and pecan, candies: divinity, fudge, peanut brittle, and Carmel popcorn balls, and her very famous…OATMEAL COOKIES! These cookies would be known as “Mema’s cookies”! Even friends of grandchildren knew of them!!

Juanita loved playing Bingo from Orange to Austin and finally in Horseshoe Bay. Playing three cards at a time was common and she always called to report her wins.

The family wishes to express their gratitude for the wonderful care provided by the Clairmont & Amada in Austin, and Celeste Care & Accent Care Hospice in Horseshoe Bay. It was your assistance and compassion that enabled Juanita to flourish, smile, and giggle!

In lieu of flowers, the family requests donations in Juanita’s honor to

Friends of the Orange Depot