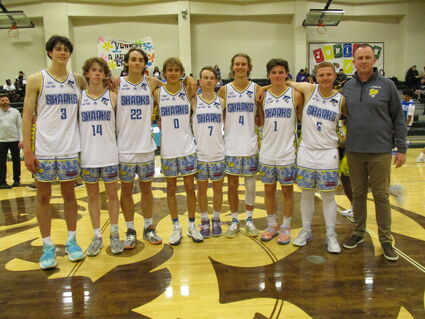 The Little Cypress Mauriceville/International Paper basketball tournament held December 29-30 in Orange lived up to its name this year. It truly was an international affair.

Little Cypress Mauriceville and ten other high schools from Texas sent teams including some junior varsity and freshman squads to play. The biggest draw though for the fans attending the two days of games was a team of high school all stars from Australia.

The players for the Southern Peninsula Sharks from Australia were selected especially for this traveling team of basketball ambassadors. Australia being located south of the equator is experiencing its summer at this time of the year, and the ball players are out of school during their summer break.

The team from Australia will be over here a couple of weeks playing basketball in tournaments or against high school teams in multiple locations. The team's coach Ben White responded, "This is our summer holidays. These boys finished high school they're in holiday for the moment, so we'll spend two weeks in the U.S. because that's where the basketball is and we'll have some fun with it."

This is not the team's first visit to southeast Texas. "We've had teams come here in the past, we heard this was a good tournament so we came down, and it proved that it was great to be here," White replied.

As might be expected from a team of all-stars the Australians played quite well in the Little Cypress Mauriceville tournament. The Sharks handily beat the Anahuac Panthers and the Tarkington Longhorns on Thursday. After dropping an exciting game 54-53 with the host Little Cypress Mauriceville Bears the Sharks beat the Port Neches-Groves Indians on Friday. As a gesture of friendship the Australians gave souvenir wool caps to the members of their opposing teams during the tournament.

The Sharks went from Orange to Houston and then to Dallas for a couple of games. The tour for the Australians will end in a little over a week in Los Angeles. "There will be some time at Disneyland awesome stuff and all the sightseeing, so it'll be fun for the boys," White concluded.