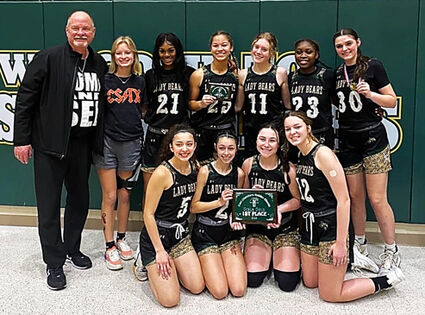 Between Christmas and New Year's Day the Little Cypress Mauriceville Lady Bears played in the East Chambers Tournament at Winnie. The Lady Bears came home with the trophy winning the three-day tournament.

Later on Wednesday the Lady Bears battled the Liberty Panthers in a tight game. Four fouls on Washburn forced coach Eddie Michalko to sit her on the bench for much of the second half but Keylie still scored 20 points. Little Cypress Mauriceville trailed Liberty until the last minute of the game before rallying for a 41-37 win. Clark scored 10 and Frenzel chipped in with 9 points.

The third day of the tournament on Thursday were the semi-finals with the Lady Bears earning a place in the finals defeating Hallettsville 49-32. Once again Washburn got in early foul trouble, and Michalko had his Lady Bears use a patient offense with Keylie out resulting in balanced scoring. Annabelle Fisher and Eden Frenzel both scored 12 points to lead LCM.

The finals later on Thursday pitted Little Cypress Mauriceville against the Jasper Lady Bulldogs. Fouls got the Lady Bears in trouble again with Washburn and Fisher having to play the second half with four fouls apiece causing LCM to be behind until the final minute.

Annabelle responded with an amazing eight points in the fourth quarter. Washburn closed as the high scorer for the fourth time in five games putting in 24 points. Frenzel and Clark made strong contributions with 10 and 9 points respectfully as the Lady Bears won the championship game 57-51 over Jasper.

Keylie Washburn averaged 19.8 points in the five games and was named the Most Valuable Player for the tournament. Mackenzie Clark was named to the All-Tournament team.

Coach Michalko was proud of all his Lady Bears and thought Annabelle Fisher and Eden Frenzel could have been picked for the All-Tournament team. "All the girls played hard and refused to quit. They wanted it more than anyone else," Michalko stated.

District action resumed on Tuesday, January 3, for the Little Cypress Mauriceville Lady Bears (1-1) at Bridge City against the Lady Cardinals. The Lady Bears play their next district home game on Friday against the Vidor Lady Pirates.